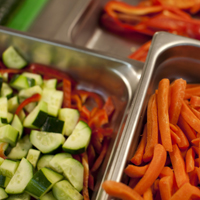 Despite some reports that schools are quitting the National School Lunch Program, the reality is that many across the country are serving nutritious foods that kids enjoy. Project director Jessica Donze Black answered some questions about how districts are successfully implementing the healthier meal standards.

Q. A recent news report indicated schools around the country are dropping out of the National School Lunch Program because of new healthy food standards. How could this be?

Donze Black: The answer is they're not. The new standards are good for kids, and their parents know that. Schools are serving more fruits, grains, and vegetables, and lots of kids are eating healthier. Like any change, it may take time for some kids to get used to it. But the pattern is clear: Many schools that got a head start on the new standards by putting healthier meals on the menu before the requirements went into effect are reporting INCREASED student participation in meals. The U.S. Department of Agriculture, which operates the National School Lunch Program, has a list of success stories that stretches from Alabama to Wyoming.

Donze Black: Absolutely. In 2012, the program operated in more than 100,000 schools and residential child-care institutions, providing low-cost or free lunches to more than 31.6 million children daily.

The School Nutrition Association's “Back to School Trends Survey” for the 2013-2014 school year found that only 1 percent of the 521 school nutrition directors surveyed reported a school quitting the National School Lunch Program. Just 3 percent reported having a school that was considering dropping the program. Nearly 93 percent reported that they were not dropping the program and had no plans to do so.

Q. What strategies have been helpful among schools that have successfully made the change to healthier meals?

Donze Black: Schools that are able to show young people that healthy food tastes good are seeing meals participation increase! They've encouraged kids to try new things and to be part of the change with samples and taste tests and creative marketing and nutrition education. They've varied their menus and given kids healthy choices. What we've found is that it's really important for schools to communicate with students and their parents. Remember, some of the kids aren't used to eating many of the entrees, fruits, and vegetables now being served. It can take a little time for everyone—especially kids—to get used to the change. But this change is an important one.

Q. Can you give us an example?

Donze Black: Absolutely! Look at Cincinnati Public Schools. In 2010, the Ohio legislature set new nutrition standards for schools. Now, high schoolers in Cincinnati have as many as nine healthy entree options at lunch. It's not just a slice of pizza—but a pizza with whole grain crust, served with salad and a piece of fruit. Kids like it and the numbers prove it: In the 2009-10 school year, three-fourths of elementary school students (74 percent) and half of high school students (51 percent) ate school lunches. By 2012-13, those numbers rose to 81 percent and 67 percent.

Q. But isn't this more expensive?

Donze Black: Not necessarily. Let's use Cincinnati again as an example. The food service program there went from being in a deficit—four years ago it had to borrow $500,000 from the school district to stay solvent—to making sufficient income to reinvest in equipment, training, and more. You can learn more about their story here. There are plenty of other examples of success on our website.

Q. What else should schools do to make sure students have access to healthy foods?

Donze Black: The next vital step is for districts to look at the rest of the foods students can purchase during the school day, such as those in vending machines, a la carte lines, and snack bars. USDA recently issued nutrition standards for those items that serve as a baseline—states and localities can build on them and customize exactly what is served to students in their schools. The good news is that research shows implementing such guidelines could help students maintain healthy weight and increase food service revenue, so offering nutritious snacks is really a win-win.