Fueled by a groundswell of public support, European legislators late last week took a huge step toward ending overfishing by agreeing that most European Union fish stocks will be fished sustainably by 2015 and all stocks by 2020. The decision is part of a thorough reform of the EU's Common Fisheries Policy, or CFP, and follows four years of concerted campaigning by a diverse group of stakeholders. The deal—involving the European Parliament, the European Commission, and all 27 EU member States—also seeks to greatly decrease the discarding of bycatch. Every year, fishermen engaging in this wasteful practice throw tonnes of dead or dying fish back into the sea.

Since its inception in 1983, the CFP has failed to prevent overfishing. In 2007, the EU Court of Auditors judged that the policy had failed to achieve its central objective—the sustainable exploitation of living aquatic resources. Two years later, the commission's green paper, “Reform of the Common Fisheries Policy,” confirmed that dramatic change was needed. Key findings of the paper were that 88 percent of EU fish stocks were being caught beyond their maximum sustainable yield, with 30 percent of these stocks considered outside safe biological limits. The paper concluded that European fisheries were eroding their own ecological and economic basis. 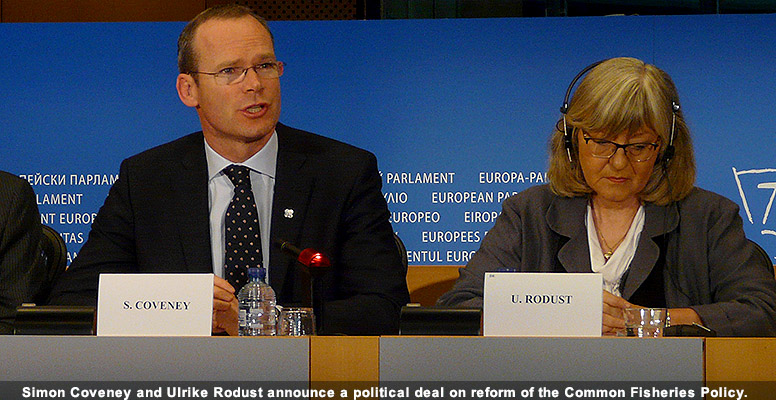 In 2009, just in time to respond to the commission's public consultation on the green paper, The Pew Charitable Trusts initiated the OCEAN2012 coalition to support a fundamental reform of the Common Fisheries Policy. The coalition has swelled from its initial five groups to 188 in 24 EU member States, and it now includes fishermen's organisations, leading marine scientists, development agencies, environmental nongovernmental organisations, aquaria, and others who share an interest in sustainable European fisheries.

In 2010, OCEAN2012 brought together 70 organisations, including artisanal fishermen, to sign a declaration calling for low-impact fisheries to be placed at the heart of the CFP reform. More recently, the coalition in April gathered 217 civil society organisations to call on EU fisheries ministers to support an end to overfishing and a speedy restoration of fish stocks. Also in April, in an unprecedented initiative, 220 Spanish scientists wrote to Miguel Arias Cañete, Spain's minister of Agriculture, Food and Environment, urging the country to shift its official stance and support the recovery of fish stocks.

OCEAN2012 has engaged in numerous activities, including partnering with celebrity chefs and organizing the hugely successful European Fish Week, to raise public awareness of overfishing and the opportunity of CFP reform and to direct this attention toward decision-makers.

After more than four years of deliberation and debate by and between the European institutions, Simon Coveney, representing EU fisheries ministers, and Germany's Ulrike Rodust, representing the European Parliament, agreed early in the morning on May 30 to a political deal on reform of the Common Fisheries Policy.

“This is a tremendous win for fisheries, the environment, and the European people,” said Uta Bellion, Pew's EU marine program director and coordinator of OCEAN2012. “By agreeing to rebuild fish stocks, set a legally binding target to end overfishing, and reducing bycatch and discarding, European leaders finally showed the resolve needed to secure a future for a vital industry and the citizens that have come to depend on it for food.”

The deal also requires member states when distributing fishing opportunities to endeavour to use transparent environmental and social criteria, including the impact of the fishery on the environment, the history of compliance, and the contribution to the local economy.

"This is a well-deserved success for [EU Fisheries] Commissioner Maria Damanaki and a testament to her vision,” Bellion continued. She also praised Rodust for her considerable consensus-building effort and Coveney for persuading the European Council to support comprehensive reform. “Also, none of this could have come about without the massive support of European civil society,” Bellion said. “People wanted to see an end to overfishing and the wasting of our precious natural resources.”

The reform is not completely over. The European Parliament and fisheries ministers must still agree on a future EU fisheries subsidies regime, the European Maritime and Fisheries Fund, that supports an end to overfishing and the rebuilding of fish stocks.