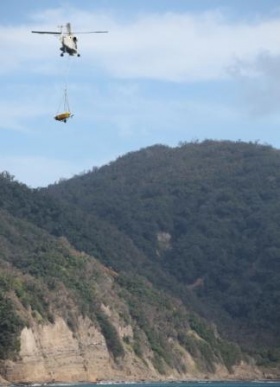 The Seasprite loading up for one of 40 loads it carried to the island today. Photo courtesy NZ Defence Force.

Last night, when Lieutenant Tim Oscar, the Officer of the Watch arrived at the bridge for his midnight to 4am shift (seriously, that’s what they do, all the lights on the bridge are turned off and they watch the sea) he noticed something strange. He turned the ship’s spotlights on and discovered the ship was ploughing through the wall of pumice we were looking for yesterday.

The ship travelled through it for half a nautical mile, and he estimates it was two feet thick and extended sideways as far as the eye could see. “It was like being in an icebreaker hitting an ice shelf,” he said this morning. He described it as “the wierdest thing I’ve seen in 18 years at sea”. It was too dark and the ship was going too fast to stop and take samples, so he noted down the latitude and longitude (29 59.43 degrees south and 179 25.598 degrees west) and motored on through it.

We arrived at Raoul Island in the early hours of the morning and anchored at 7am. The local wildlife took an immediate interest in us: a pair of Tasman boobies joined the petrels we began seeing yesterday and then a mako shark and a small pod of dolphins began playing close to the ship.

Clinton Duffy, the shark specialist on board, says that while mako sharks have been seen further out to sea in this area, there’s no record of any within the marine reserve. That doesn’t mean they’re not usually here, but just that this marine environment is largely unexplored – every science expedition results in new species being identified. 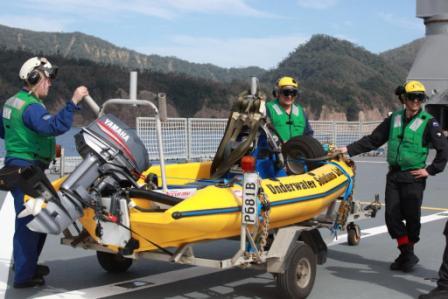 Today was all about logistics, with a big joint effort between the Army, the Navy and the Air Force to get Department of Conservation and GNS Science staff and supplies onto the island. People travelled to the island on a RHIB (rigid hull inflatable boat) while supplies – I saw food, beer, roofing iron and a yellow boat – were all hooked beneath the Seasprite helicopter and carried onto the island. Around here they call this “humping and dumping”.

At the same time, the marine biologists on board were getting ready to start their field work. On a reconnaissance trip to find the best diving spots, University of Queensland PhD student Libby Liggins collected sea urchins for her research into genetic connectivity. Tomorrow we’re searching for dolphins with Rochelle Constantine. Tonight, we’re opening the stern ramp at the back of the ship and trying to attract sharks for Clinton Duffy’s research project.