For decades, fishermen in the Gulf of Mexico have used surface longlines to catch swordfish and yellowfin tuna. These lines stretch an average of 30 miles, dangle hundreds of baited hooks, and can be left in the water for up to 18 hours. This fishing method catches and kills large numbers of rare and endangered ocean wildlife, which are usually thrown overboard dead or dying. This nontarget bycatch includes blue marlin, leatherback sea turtles, and western Atlantic bluefin tuna. Bluefin in particular face a serious threat, since the Gulf is their only known spawning area. 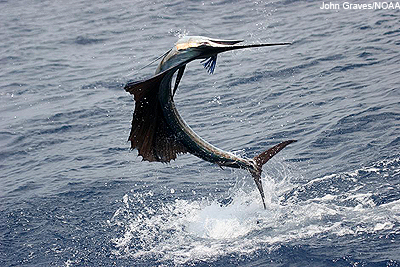 Not only does this gear cause problems for severely depleted species, but size restrictions meant to protect juvenile fish also result in many target fish getting thrown back. Surface longline fishermen keep less than half the swordfish they haul in because they are too small. Of those discarded, 77 percent die.

The National Marine Fisheries Service has attempted to safeguard ocean wildlife in the Gulf of Mexico from these indiscriminate surface longlines. In 1982, fishery managers prohibited vessels from directly fishing for bluefin tuna in the Gulf. They also put strict regulations on the use of live bait and even required hooks with specific shapes, sizes, and strength to help protect bluefin tuna from dying on the line. To date, none of those measures has significantly reduced the catching and killing of these nontarget animals.

Almost two years ago, our country experienced its largest environmental disaster, the Deepwater Horizon blowout. This Gulf oil spill could not have happened at a worse place or time for several species. It occurred in the only known spawning area for western Atlantic bluefin tuna and spewed millions of gallons of oil during the peak of the species' breeding season. This historic blowout also coincided with the spawning seasons for blue and white marlin and sailfish. Researchers are still studying the effects of this catastrophe, and it will be quite some time before we know the true impact. But it is near certain that the spill caused some harm to these severely depleted fish.

Surprisingly, out of this Deepwater Horizon tragedy comes a potential win-win solution for the decades-old problem of surface longline bycatch. Fishermen and scientists, using funds from the sale of the recovered oil, are working together to test alternative, low-impact fishing equipment that is not widely used or is new to the Gulf of Mexico.

If the test program demonstrates that the alternative methods offer economically and environmentally viable options to surface longlines, then commercial fishermen, scientists, environmentalists, and fishery managers will work together to secure Deepwater Horizon restoration funds to pay for a gear-transition program. This would provide necessary resources for surface longline fishermen to shift to more-selective gears through the purchase of vessels more appropriate for low-impact equipment. The money would also help pay for this gear and training on its use.

While the results are not in yet, it's encouraging to see a potential solution to this problem. Threatened and endangered ocean wildlife deserve necessary protection sooner rather than later.