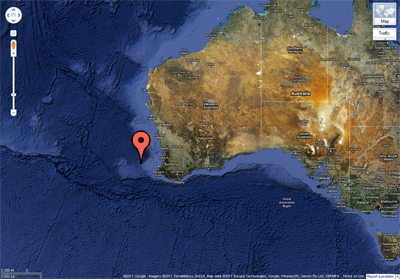 Australia has the third largest marine area of any nation in the world, ranging from coral-rich tropical seas to the sub-Antarctic waters of the Southern Ocean.

This year, Australia is poised to become the first country in the world to create a national system of marine sanctuaries to protect its oceans. The government's ambitious plan will focus on five regions around the country's coastline.

The first region to be considered this year is the South West, an extraordinary 1.3 million square kilometer area (501,933 square miles) with some of the most spectacular and unique marine life in the world.

However, less than 1 percent of the South West marine region is currently protected. Despite its incredible marine life (PDF), very little of its waters are protected from the impacts of overfishing and ocean pollution, including oil spills.

Nearly nine out of ten marine species in these waters exist nowhere else on the planet. One of Australia's tallest underwater mountain ranges as well as deep sea canyons, including one larger than the Grand Canyon in the United States, can be found here. Take a virtual tour of Australia's South West marine region.

The South West region is a critical step in the government's visionary plan for a national system of marine sanctuaries. Australia has a unique opportunity to improve the health of the oceans, and in doing so, to set a global example for marine conservation. Just this week, Australia released its proposed plan for protecting this marine region (PDF).

After the South West, the Australian government will turn its attention to other marine regions around the country, including the Coral Sea.