Belugas, "qilalugaq" in Inuktitut, are known for their complex, musical calls. Belugas are one of the few whale species that live year-round in the Arctic and subarctic. For this reason, and because of their predictable migration pattern, belugas are vital to Inuit communities across the Arctic.

A medium-size white whale—adults average 5 meters (16 feet) and 1,500 kilograms (3,000 pounds)—the beluga (Delphinapterus leucas) is the only cetacean (a classification that includes whales, dolphins, and porpoises) able to turn its head. That’s because its neck vertebrae are not fused. Belugas spend winters in dense, moving pack ice and summers in comparatively warm river estuaries.

Western Hudson Bay belugas are one of seven distinct beluga populations found in Canadian waters. Each June, they travel in small pods, returning to southwestern Hudson Bay after wintering south of Baffin Island in Hudson Strait. Three large, shallow, river estuaries in southwestern Hudson Bay—the Seal, Churchill, and Nelson—provide a summer home for the majority of this population. More research is needed to determine why this habitat is so important, although the estuaries provide an ideal place to molt, feed, calve, and nurse young belugas. The shallow water also protects them from killer whales that are too large to venture into these areas. Belugas likely return to the same estuary year after year. 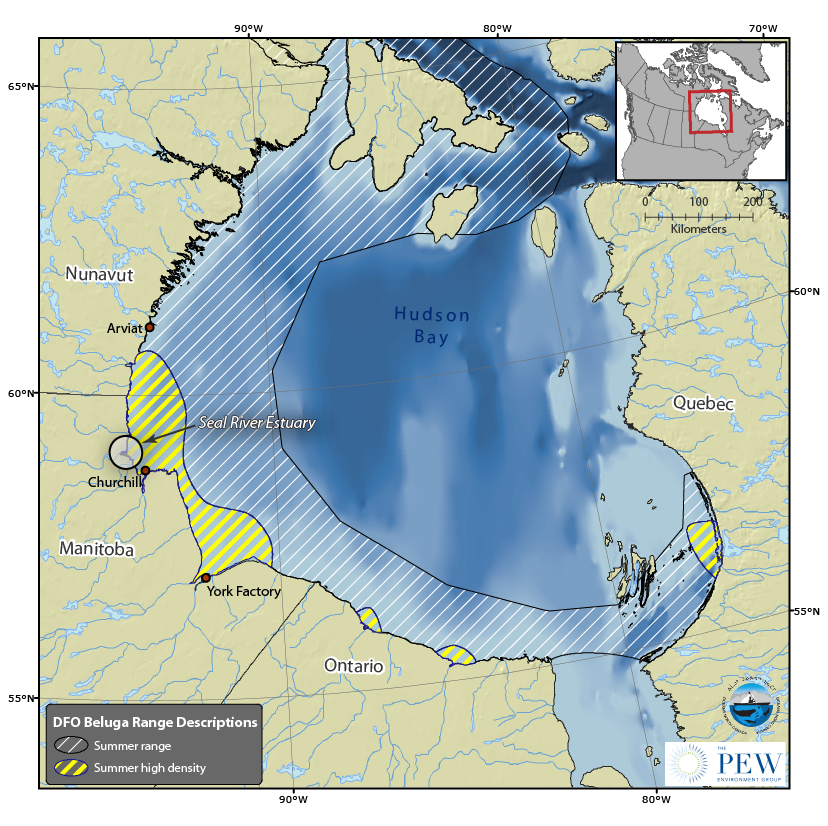 Population size: The western Hudson Bay beluga population numbers an estimated 57,300 and makes up approximately 35 percent of the world’s total, currently estimated at more than 160,000 based on population studies conducted since 2000.

Social habits: Belugas can travel in pods of up to 200 whales, especially during the spring and fall migration. Average group size, however, is about four. Males and females travel together, except during calving season, when mothers and their young form separate pods. Belugas are extremely social animals, playful with each other and exhibiting curiosity about humans and boats.

Movement and diving: Belugas usually swim 2 to 4 kilometers per hour (kph) but can move at speeds of up to 20 kph. They have been known to dive to depths of more than 800 meters, with dives lasting up to 25 minutes.

Size and appearance: A male beluga can reach more than 5 meters (16 feet) in length and weigh 1,400 kilograms (3,000 pounds); females have been recorded up to more than 4 meters (13 feet) and weighing 250 to 700 kilograms (550 to 1,540 pounds). Born pink, dark gray, or brown, they turn gray in early life and then slowly lighten to white as they lose pigment cells at sexual maturity. Belugas, like other Arctic whales, have no dorsal fin but a dorsal ridge that is thought to be an adaptation to life in ice-filled waters.

Reproduction: A female beluga reaches sexual maturity between four and seven years. Gestation lasts 14 to 15 months, and calves are born between May and September. Female belugas give birth on average to one calf every three years.

Life span: Belugas live an average of 30 years. New and ongoing research suggests that they can live significantly longer. 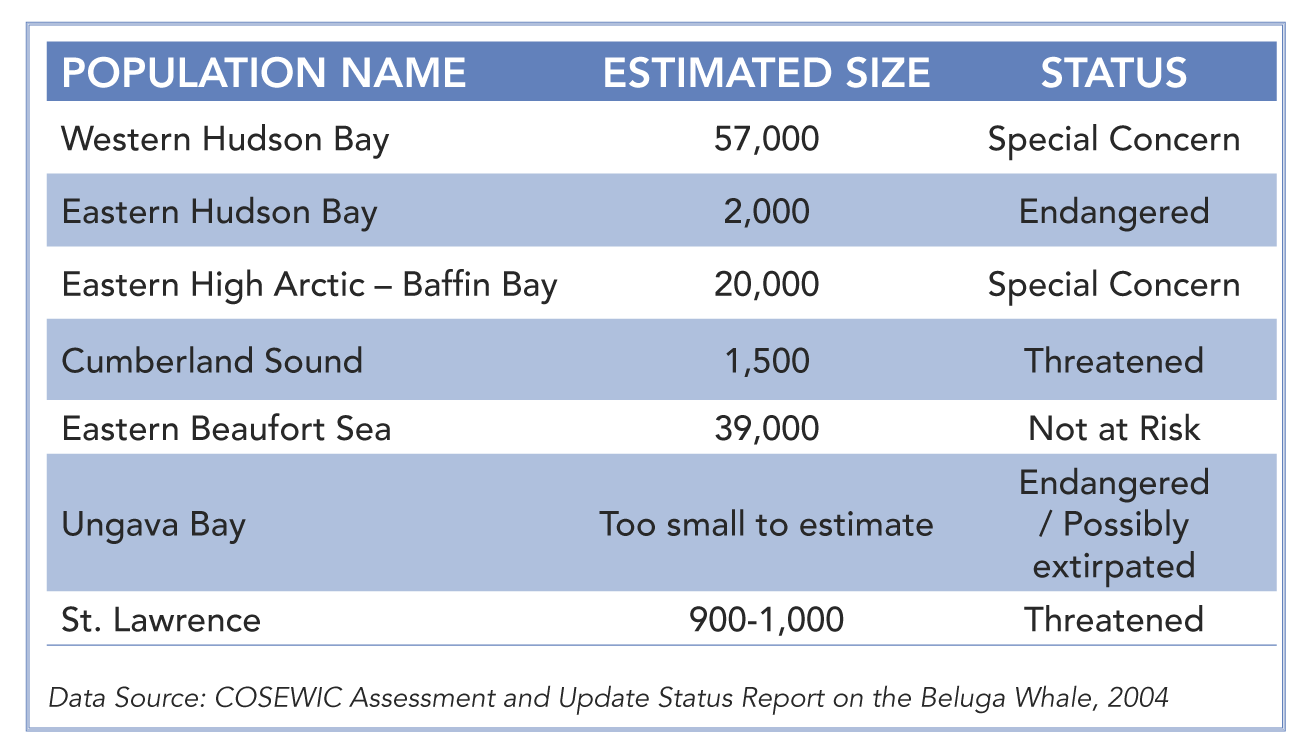 © COSEWIC Assessment and Update Status Report on the Beluga Whale, 2004

Population status: The Committee on the Status of Endangered Wildlife in Canada (COSEWIC) is mandated to assess the national status of species considered to be at risk. The western Hudson Bay population of beluga whales, assessed “Not at Risk” by COSEWIC in 1994, was upgraded to “Special Concern” in 2004 based on potential threats to the population from shipping and hydroelectric development.

Conservation: There is currently no habitat protection for this population in its winter or summer grounds.