Every summer, one of the largest concentrations of beluga whales in the world returns to the southwestern coast of Hudson Bay as the sea ice recedes. An estimated 57,000 belugas migrate to estuaries formed by the Seal, Nelson, and Churchill rivers, part of a vast drainage system that extends across Manitoba and three other provinces before emptying into Hudson Bay. Scientists who studied this beluga population in the 1980s and early 2000s documented a close relationship between these whales and the estuaries where they molt, feed, and give birth. But many questions remain about this remarkable species and its habitat.

That’s why Oceans North Canada, in cooperation with the Province of Manitoba, has launched a multi-year beluga study to gather data on the western Hudson Bay population. More research is needed to accurately assess the extent of the Hudson Bay belugas’ summer range and their migration routes. In July 2012, six belugas were tagged in the Seal River estuary and transmitted valuable data for almost a year about their summer and winter migration patterns.

In July 2013, the science team will expand its work with a boat-based survey to document the density of belugas and their use of the habitat. The six-day survey will record information along transect lines that extend 15 kilometres offshore in the area most heavily used by belugas for feeding, nursing and resting.

While belugas consistently return to the main estuaries in this region, scientists don’t know whether particular pods travel between estuaries or whether they branch off into subgroups that remain on specific rivers. Belugas’ extensive use of these estuaries indicates the importance of this region to them. But more scientific studies are needed to understand why belugas are drawn there and how they interact with this environment so that key habitat can be protected. 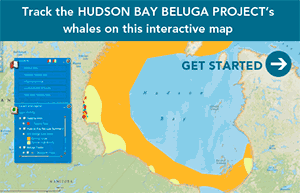 This work is also important to the hundreds of Inuit families who rely on a sustainable hunt for beluga or “qilalugaq” in Inuktitut. By conserving habitat, vital food resources will also be protected for Inuit and aboriginal communities in this region. Information about the project was shared with the hunters and trappers organization in the Inuit community of Arviat, Nunavut, who expressed support for the study.

Research from this study will help answer several questions: