Indigenous peoples make up the vast majority of the population in the Canadian Arctic. Most of them are Inuit and Inuvialuit, related to the Iñupiat and Yupik in Alaska and Russia and the Kalallit of Greenland. Over 36,000 Inuit and Inuvialuit live in Inuit territories in Canada known collectively as Inuit Nunangut, the Inuktitut phrase for land, water, and ice. Other indigenous peoples in the Canadian Arctic include Gwich’in in the Yukon and Northwest Territories, the Innu in Labrador, and the Cree in Hudson's Bay.

The entire Canadian Arctic is governed by four Inuit land claims agreements [Arctic communities] with the Canadian government. The regions recognized under these agreements are:

The land claims agreements create organizations with Inuit or Inuvialuit members, provide a mechanism for land selection and ownership, establish co-management boards and other natural resource management bodies, and define the future relationship between the indigenous organization and the Canadian government.

"The four Inuit land claims agreement areas form a continuous chain defining Inuit rights and jurisdictional arrangements across the Canadian Arctic from the Alaska border to Nunatsiavut in Labrador. These land claims agreements recognize the Arctic as our ancestral and contemporary home in Canada. Others are welcome to work with us to develop our home to the mutual benefit of ourselves and of Canada, but development must be based on full respect and genuine partnership." 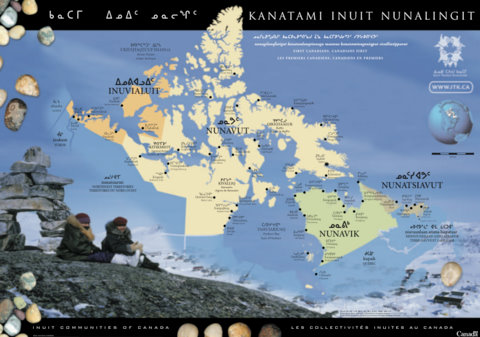 Three thousand Inuit living in six settlements on the coast of the Northwest Territories and the western edge of the Arctic Archipelago make up the Inuvialuit. A landmark oral history project that documented traditional use and occupancy of the region led to the 1984 Inuvialuit Final Agreement after 10 years of negotiations. The agreement established the Inuvialuit Settlement Region, covering 906,000 square kilometres (350,000 square miles) of land and the entire Canadian Beaufort Sea. The Inuit co-manage this region with the federal government. The agreement also provided financial compensation and ownership of 91,000 square kilometres (35,000 square miles).

The Inuvialuit Regional Corporation (IRC) has ownership of the selected land in the region and operates several programs. The agreement also set up extensive co-management and consultation rights/responsibilities carried out by the Inuvialuit Game Council, the Fisheries Joint Management Committee, and other environmental review boards served by a Joint Secretariat.

In 1993, Canada concluded land claim negotiations with Nunavut Tunngavik Inc. (NTI) and agreed to create a new political jurisdiction called Nunavut in the center of the Arctic. The government of Nunavut was established in 1999. Its territories comprise 20 percent of Canada’s land mass and more than half its coastline.

Twenty-five communities with a total Inuit population of 22,500 are scattered throughout Nunavut’s 2 million square kilometres. The Inuit own a total of 356,000 square kilometres (137,000 square miles) and co-manage the rest with the federal government.

The land claims agreement recognized Inuit rights to harvest wildlife, established three national parks, created a trust fund, and secured a share of royalties on minerals and oil and gas development on federal government-owned Crown lands. The agreement also created several resource and wildlife management boards called institutes of public government, including the Nunavut Wildlife Management Board and the Nunavut Planning Commission. Although the agreement also contemplated the creation of the Nunavut Marine Council as a way for the public governance bodies to coordinate on marine policy and issues, the Council has never been funded by the Canadian government.

More than 9,000 Inuit live in 15 villages along Ungava Bay, Hudson Strait, and Hudson’s Bay in the northern Quebec territory of Nunavik. This territory covers 660,000 square kilometres (255,000 square miles), making up one-third of the province of Quebec. Yet there are no roads between Nunavik and southern Quebec or between its communities. Quebec first recognized the rights of Inuit in Nunavik in 1978 as part of a settlement of a lawsuit filed by the Cree and Inuit in opposition to the province’s massive James Bay hydroelectric project.

The Makivik Corporation manages the Inuit’s heritage funds provided for in the James Bay and Northern Quebec Agreement.

The Nunatsiavut government has completed assessments of its marine waters to identify environmentally sensitive areas and traditional knowledge about hunting and fishing use. Before the Atlantic cod industry was decimated by overfishing in the 1990s, fish processing plants were the largest employers in the five Inuit villages because of their proximity to the Grand Banks.