Leaders from eight countries launched an initiative today to prevent the extinction of sharks, symbolizing the latest development in the growing movement to safeguard the ocean's top predator. Members of the coalition committed to a declaration supporting the development of sanctuaries that end commercial shark fishing in their national waters. 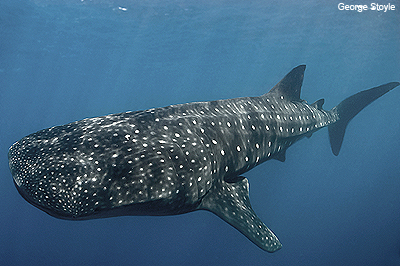 This announcement comes just one year after President Johnson Toribiong of Palau and President Porfirio Lobo Sosa of Honduras issued a global challenge to protect dwindling shark species. Several countries, states and territories have answered that call by committing to a range of conservation policies. This year, Honduras, the Bahamas, the Maldives and Tokelau have created sanctuaries for sharks off their shores, and the countries of Micronesia committed to establishing them in their waters.

Commercial fishing of these animals is now prohibited in more than 2.7 million square kilometers (1 million square miles), an area larger than Mexico and Texas combined. Domestically, trade bans on sharks and shark products recently passed in California, Washington and Oregon, and internationally in Guam and the Northern Mariana Islands. 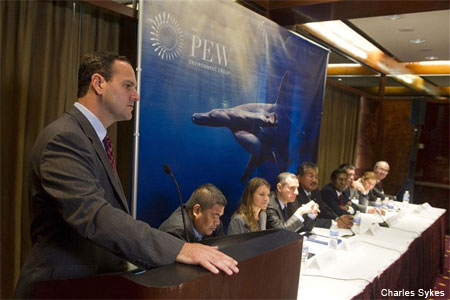 “With each new sanctuary, sharks gain another ally in their fight for survival,” said Matt Rand, director of Global Shark Conservation for the Pew Environment Group, the organization which is spearheading efforts to establish shark sanctuaries where targeted fishing for the species is prohibited.

Sharks are especially vulnerable to overfishing because they mature and reproduce slowly. As top predators, their depletion also has risks for the health of entire ocean ecosystems. Up to 73 million of these animals are killed each year to support the global fin trade, while 30 percent of all sharks are threatened or near threatened with extinction. Some populations, such as the scalloped hammerhead, have declined by up to 98 percent. But many governments are recognizing that sharks are more valuable alive and can be a key economic driver as a tourist attraction.

“The shark sanctuary here supports the health of our ocean environment and economy,” said Honduran President Lobo Sosa. “However, these species migrate beyond our waters, so it is necessary for us to work together to ensure that their populations and marine ecosystems are healthy.”

Sharks are the intended catch of some fisheries. They are also frequently caught unintentionally as bycatch. In certain fishing operations, including open sea longliners that target tuna and swordfish, as much as 25 percent of the take can be shark bycatch.

“When I created Palau's sanctuary in 2009, I knew our country's action could not accomplish the task of conserving the ocean's vast biodiversity alone,” said Palauan President Toribiong. “Our ocean's health depends on sharks. I am delighted that more countries are pledging to play an active role in ensuring these creatures' survival, not just in our lifetime but for future generations as well.”

Under the declaration supported by The Bahamas Colombia, Honduras, the Maldives, the Marshall Islands, Mexico, Micronesia and Palau, up to 6 million additional square kilometers (2.3 million square miles)—greater than three times the land mass of Mexico—could be off-limits to commercial shark fishing and designated as shark sanctuaries. By signing the pledge, signatories commit to:

“We applaud these countries for their leadership in protecting these amazing animals, and Pew will continue to work with governments and key stakeholders to support shark conservation efforts as they implement these new commitments,” said Rand.

Notes
In addition to its sanctuary work, Pew has led efforts to ban the sale, trade and possession of shark fins in the Northern Mariana Islands and Guam; to secure strict conservation limits for eight species of vulnerable sharks caught in Atlantic and Pacific international waters; to pass legislation to end shark finning in U.S. and Chilean waters; and to include stronger conservation requirements through the sustainable fisheries resolution at the United Nations. In conjunction with this declaration, Pew is working to create new shark sanctuaries in the next twelve months that would nearly triple the area of the world's ocean off limits to commercial shark fishing.

On July 28, 2011, the following Micronesian countries, states and territories committed to creating a regional sanctuary: Palau, the Marshall Islands, Guam, the Northern Mariana Islands and the Federated States of Micronesia, which is composed of Yap, Chuuk, Pohnpei and Kosrae.