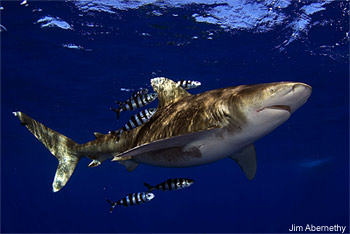 Governments will soon have a chance to help conserve populations of oceanic whitetip sharks, which have declined so much in the eastern Pacific that catch numbers have been reduced to almost zero.

Tuna fisheries are primarily responsible for the drastic decrease in population of one of the most prolific and widespread shark species, the oceanic whitetip (Carcharhinus longimanus).

Whitetips are routinely caught inadvertently in fishing nets and on longlines, a type of gear that extends underwater up to 30 miles. Increasing demand and high prices for fins in Asia mean fishermen have little incentive to release the animals alive. There is ample evidence showing that, even when it is illegal to do so, they often cut off and keep the fins before throwing the shark overboard to die.

The 20 government members of the IATTC have an opportunity to agree on measures to promote shark conservation, including the immediate release of all oceanic whitetips from nets and lines and a ban on the use of wire leaders, the part of the fishing line attached to a baited hook—a key cause of species mortality. The leaders could instead be made of nylon, which the animals can easily bite through.

“The plunging oceanic whitetip population exemplifies overall global shark decline,” said Jill Hepp, manager of Global Shark Conservation at the Pew Environment Group. “The loss of these top predators can cause irreversible damage to the health of oceans. The good news is that, in the case of whitetips caught on fishing lines, there is a relatively easy fix. As custodians of the ocean, RFMOs need to take action to protect these animals and the broader marine ecosystems they inhabit.”

According to its own science, IATTC reports that overfishing of bigeye, yellowfin and bluefin tuna is occurring and that the exploitation rate of skipjack tuna, the most common variety purchased in cans, continues to increase. There are too many vessels. Current capacity surpasses IATTC's limit by 33 percent, allowing an excess of 51 average-size purse seine vessels, which use large underwater nets, to go to sea.

“Poor fisheries management is not only taking a toll on sharks,” said Amanda Nickson, senior officer for International Policy with the Pew Environment Group. “Put simply, there are more boats chasing fewer fish, with a devastating effect on marine life as billions of unwanted or non-targeted animals are caught and discarded, dead or dying, back into the ocean. It is time for IATTC to take action to conserve sharks, set science-based total allowable catch limits for all tuna species and reduce fishing capacity in line with those limits.”

Photos of oceanic whitetip sharks are available for press use.

Find out more about Pew's work at IATTC.

The Pew Environment Group is the conservation arm of The Pew Charitable Trusts, a nongovernmental organization that works globally to establish pragmatic, science-based policies that protect our oceans, preserve our wildlands and promote clean energy. www.PewEnvironment.org.