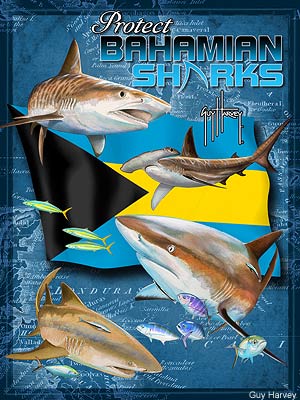 Dr. Guy Harvey, world-renowned scientist and marine wildlife artist, has joined the growing ranks of individuals and organizations calling for strict regulations to ban the commercial fishing of all sharks in The Bahamas. In support of the program, Dr. Harvey is releasing a custom-designed “Protect Bahamian Sharks” campaign logo and poster this week while visiting Nassau to meet with government officials.

“These magnificent animals have been admired for years by divers visiting The Bahamas and revered by people around the world as one of the great wonders of the ocean,” said Dr. Harvey. “However, many species of sharks are now being driven to the brink of extinction by over-exploitation, fueled mostly by the Far East's demand for shark fin soup.”

Even with the ban on longlining gear, sharks are still considered at-risk in Bahamian waters due to other methods of fishing. “There are currently no specific laws in The Bahamas protecting these amazing creatures,” said Matt Rand, director of global shark conservation for the Pew Environment Group. “We are working with The Bahamas National Trust to raise awareness to establish measures that will conserve healthy shark populations before it is too late.”

Scientists with the International Union for Conservation of Nature have estimated that 30 percent of shark and ray species around the world are threatened or near-threatened with extinction. The loss of these animals could cause irreversible damage to the ocean's ecosystem and result in the loss of hundreds of millions of dollars in the tourist trade.

The Pew Environment Group is the conservation arm of The Pew Charitable Trusts, a non-governmental organization that works globally to establish pragmatic, science-based policies that protect our oceans, preserve our wildlands and promote clean energy.

The Bahamas National Trust was established by an Act of Parliament in 1959 and is mandated with the conservation of natural and historic resources of The Bahamas. The BNT is the only known non-governmental organization in the world with the mandate to manage a country's entire national park system. For more information, contact 1-242 393-1317, visit the website at www.bnt.bs, or email [email protected].