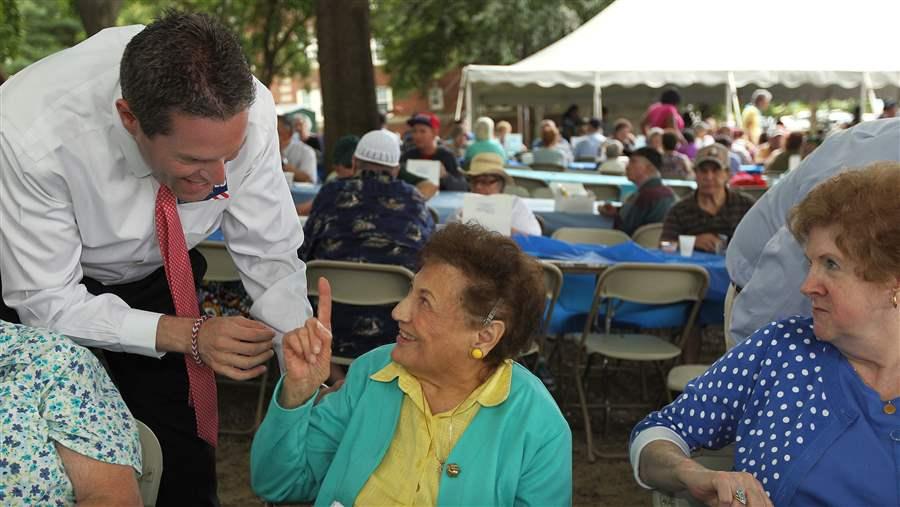 State Sen. Barry Finegold, Democratic candidate for Massachusetts state treasurer, chats with Catherine Tangusso at the Somerville mayor's senior picnic this year. The poverty rate for seniors would be much higher if it weren’t for safety net programs such as Social Security. (Getty)

That’s the power of the safety net, as shown by new U.S. Census Bureau data measuring poverty in America. The federal poverty rate is based solely on income—for 2013, it was $23,624 for a family of four. But the so-called Supplemental Poverty Measure, released this month, adjusts income to account for the value of housing subsidies, the Earned Income Tax Credit, Temporary Assistance for Needy Families (also known as welfare), Social Security, food stamps (formally known as the Supplemental Nutrition Assistance Program) and other programs. 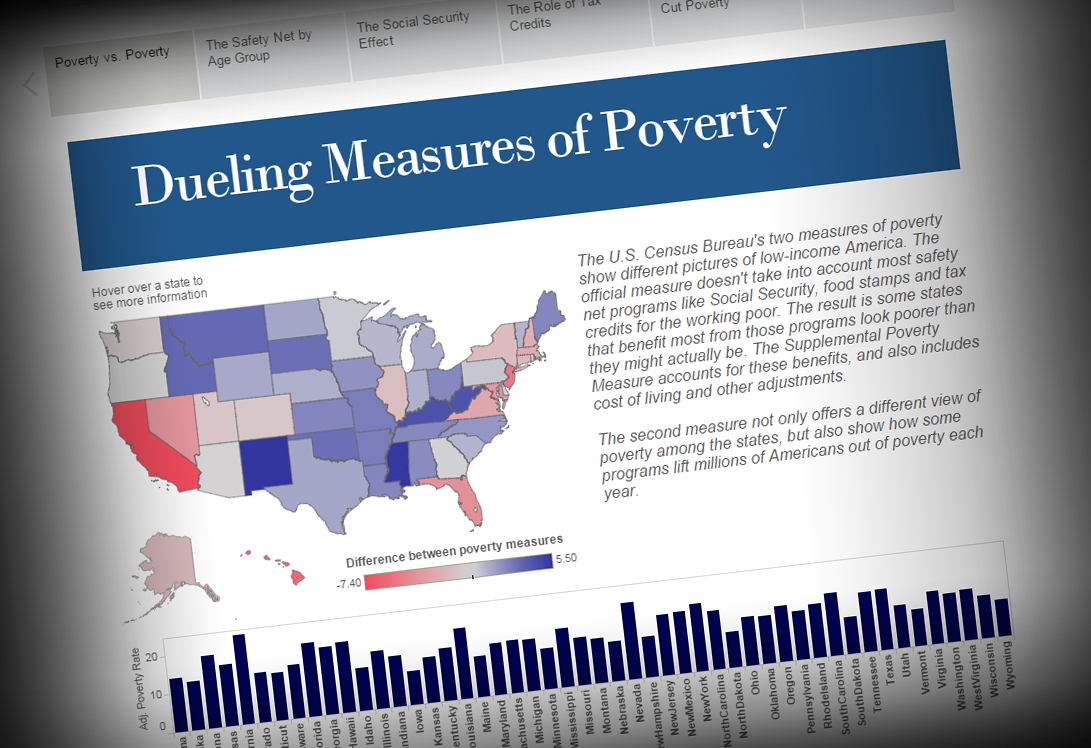 Learn how people benefit from the primary safety-net programs

The supplemental measure also factors in the cost of living and out-of-pocket medical costs in different areas of the country. In expensive areas such as Honolulu, Washington, D.C., and large swaths of California, for example, families earning more than $30,000 are considered to be living in poverty.

While it’s difficult to discern how much each program reduced poverty in each state, it is possible to calculate the extent to which people in each state benefit from some of the primary safety net programs. (See Stateline’s data visualization.)

The U.S. supplemental poverty rate in 2013 was 15.5 percent, the census found, equal to 48.7 million Americans. That rate was higher than the official poverty measure — which was 14.6 percent, or 45.8 million.

For individual states, the rates are an average of rates from 2011, 2012 and 2013. Thirteen states and the District of Columbia were poorer under the supplemental measure than under the official one. California had the largest gap between its supplemental and official poverty rates, followed by Hawaii, New Jersey, Florida, Nevada, Maryland, Virginia, the District, Massachusetts, New Hampshire, Connecticut, Alaska, New York and Illinois.

In 26 states, the poverty rate was lower under the supplemental measure than it was under the official measure. The states with the biggest differences were New Mexico, Mississippi, Kentucky, West Virginia, Montana, Idaho, South Dakota and Oklahoma.

National school lunch programs reduced the child poverty rate by one percentage point. Even relatively small programs, such as the Low Income Home Energy Assistance Program, which on average pays about $500 per household, left a dent.

Tax credits are a powerful anti-poverty measure. The most well-known is the Earned Income Tax Credit (EITC), a refundable tax credit for low- to moderate-income working individuals and couples that totaled more than $65 billion last year. Many states have similar credits that piggyback on the federal one but aren’t included in the federal data.

Mississippi claimed more than $1 billion in EITC dollars. Mississippi taxpayers who received it got an average of $2,817, compared to the national average of $2,300. Vermont recipients had the lowest average payment, at just under $1,900.

The benefits of food stamps also vary by state: States with high percentages of their populations enrolled, like Mississippi, saw more than $330 in food stamp payments per capita. In Wyoming, it was less than $100 per capita.