This brief is one in a series about state budget strategies.

In December 2015, the Federal Reserve raised the benchmark federal funds rate for the first time since 2006. Even so, the quarter-of-a-point increase still leaves U.S. interest rates close to historic lows. For state governments, the implications of these persistent low rates are mixed. While low rates provide lower borrowing costs for infrastructure projects such as roads, bridges, and schools, they also produce lower returns for governments’ financial investments, which can lead states to pursue higher returns by assuming greater risk. In this climate, many states have struggled to improve yields on their reserve balances without incurring excess risk or sacrificing fiscal flexibility.

For most states, reserve monies, which include rainy day fund balances, unallocated or “unreserved” general fund balances, and ending balances in other state funds, are largely distributed to short-term investment pools. These pools rely heavily on cash equivalents—highly liquid, short-term investments—and fixed-income securities, which feature regular payments and a guaranteed, fixed rate of return. These holdings include certificates of deposit, short-term U.S. Treasury securities, and short-term agency bonds—debt issued by public agencies or government-sponsored entities such as the Federal Home Loan Banks and the Federal Farm Credit Banks.

States generally maintain these cautious investment strategies for reserve balances in order to preserve balances and maintain liquidity, as they may need to cash out the principal on their reserve investments on short notice. The “longtime mantra has been ‘safety before liquidity before yield,’ with yield being the last in the list of our priorities,” said Patty Humbert, Arizona chief investment officer.”1 The experience of the last recession, when overall state budget shortfalls in fiscal year 2009 were twice what states held in reserves,2 also discourages reserve fund pools from assuming greater risk, given the elevated potential for losses entailed by more aggressive investment strategies.

Investment options for reserves can also be limited by federal or state regulations on permissible assets. In Arizona, for example, state law permits the treasurer’s office to invest up to 25 percent of the Budget Stabilization Fund (BSF) balance in equity securities (stocks), which offer higher potential yields but greater risk. According to the Office of the State Treasurer, however, this option has never been exercised, in part because of IRS rules on municipal tax-free debt.3 These rules deny tax-exempt status to government bonds if states invest the proceeds of a bond issuance—or an equivalent amount of general fund dollars—in vehicles that yield a higher rate of return. Because BSF balances are considered general fund dollars, and because the balance has long been less than the value of outstanding state-issued tax-free certificates of participation bonds, Arizona cannot make any equity investments from the BSF, given that expected returns on equity are higher than those on the state-issued bonds.

While concerns about safety and liquidity discourage most states from pursuing high-risk investment strategies for their short-term reserve accounts, a few have experimented with more aggressive investments for at least a portion of their reserve balances. These experiments have been prominent in states that link savings to revenue from extractive industries, because high energy prices that prevailed until recently allowed these states to build considerably larger reserves than is typical. In states such as Alaska, Texas, and North Dakota, reserve balances in recent years far exceeded what officials could reasonably expect to require for short-term expenses, enabling states to invest reserves in longer-term pools that can pursue higher-yield investments. (See Table 1.) Given the boom-and-bust nature of natural resource extraction, however, these states also illustrate the challenges and trade-offs faced when balancing higher returns and greater financial risk. 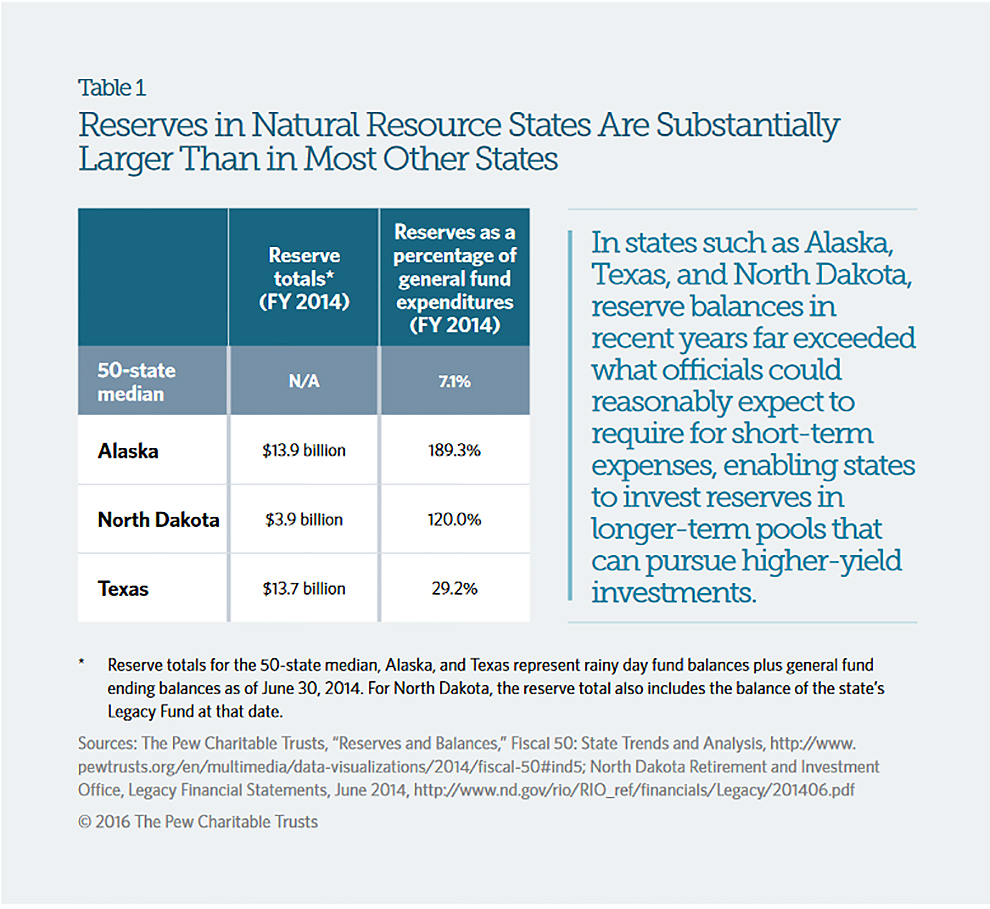 North Dakota offers one approach. In recent years, the state has deposited a large proportion of oil revenue in a restricted reserve known as the North Dakota Legacy Fund. Unlike a traditional rainy day fund, money in this fund is reserved for long-term spending needs as opposed to helping ease short-term budgetary pressures; in fact, the state cannot legally access balances from the Legacy Fund until after June 30, 2017. Officials are therefore able to invest Legacy Fund dollars in a riskier, more market-driven portfolio than for the Budget Stabilization Fund (the state’s regular rainy day fund). Accordingly, at the close of fiscal 2015, the Legacy Fund’s portfolio, 50 percent of which comprised domestic or international equity, had earned an overall 3.3 percent one-year return.4 By contrast, the Budget Stabilization Fund’s investment portfolio, comprising 83 percent short-term fixed income (with most of the remainder in Bank of North Dakota certificates of deposit), earned a 1.9 percent one-year return.5 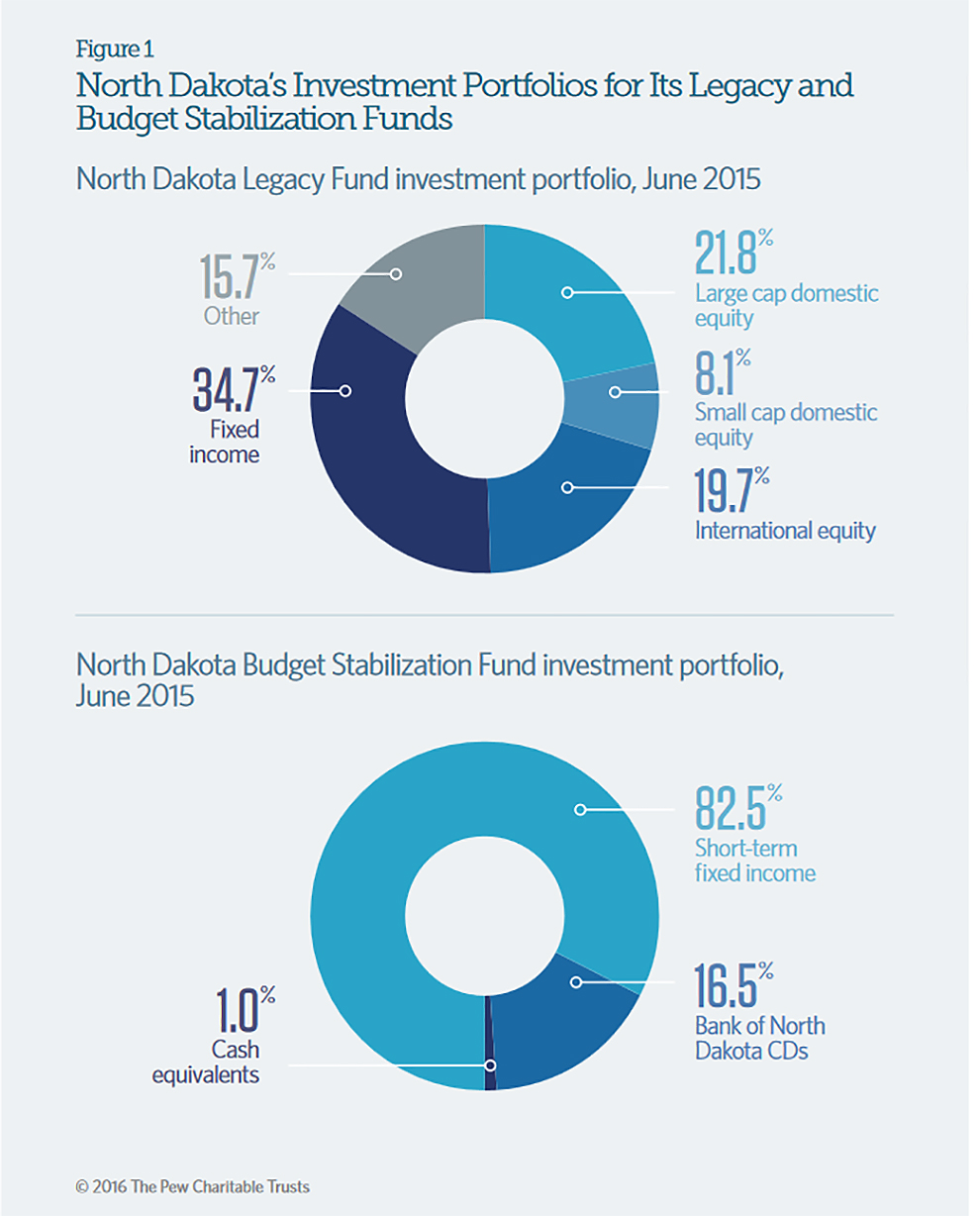 Texas has also adopted a more aggressive investment strategy for its rainy day fund, which approached $8.5 billion early in fiscal 2015. Legislators in 2015 passed a bill requiring the state comptroller to invest a portion of the Economic Stabilization Fund in excess of the “sufficient” balance6 —currently set at $7 billion7 —in investments such as corporate bonds and money market funds that offer potentially higher yields but assume greater risk.8 Because the balance had previously been held entirely in short-term cash equivalents, Texas Comptroller Glenn Hegar argued in The Dallas Morning News, the fund was losing value to inflation, something higher-yield investments could help prevent:

Under the new law, the comptroller is given discretion to determine what portion of dollars in excess of the fund’s sufficient balance will be allocated to riskier investments. The portfolio will be managed by the Texas Treasury Safekeeping Trust Co., which manages other state monies under a “prudent investor standard,” a common guideline for investment managers requiring that a fiduciary treat a portfolio as if it were their own. In essence, the trust company must take into consideration both the “probable income as well as the probable safety”10 of the portfolio. Unlike the amount falling under the sufficient balance threshold, the portion being invested will not be subject to existing restrictions on investment types, meaning that the pool can include securities with bigger risk profiles.

While North Dakota and Texas illustrate more aggressive investment approaches for reserve funds, Alaska’s recent experience illustrates how market volatility can undermine these efforts. With oil and natural gas revenue substantially down, the state has had to reconsider a policy in place since 2000 that created a subaccount within the state’s Constitutional Budget Reserve Fund (CBRF) subject to higher-yield investments. These investments were contingent upon certification by the state treasury that officials would not need to draw on reserves in the subaccount for at least five years. The downturn in oil and natural gas revenue has forced policymakers to reassess that determination.

With oil and natural gas revenue substantially down, Alaska has had to reconsider a policy that pursued higher-yield investments. 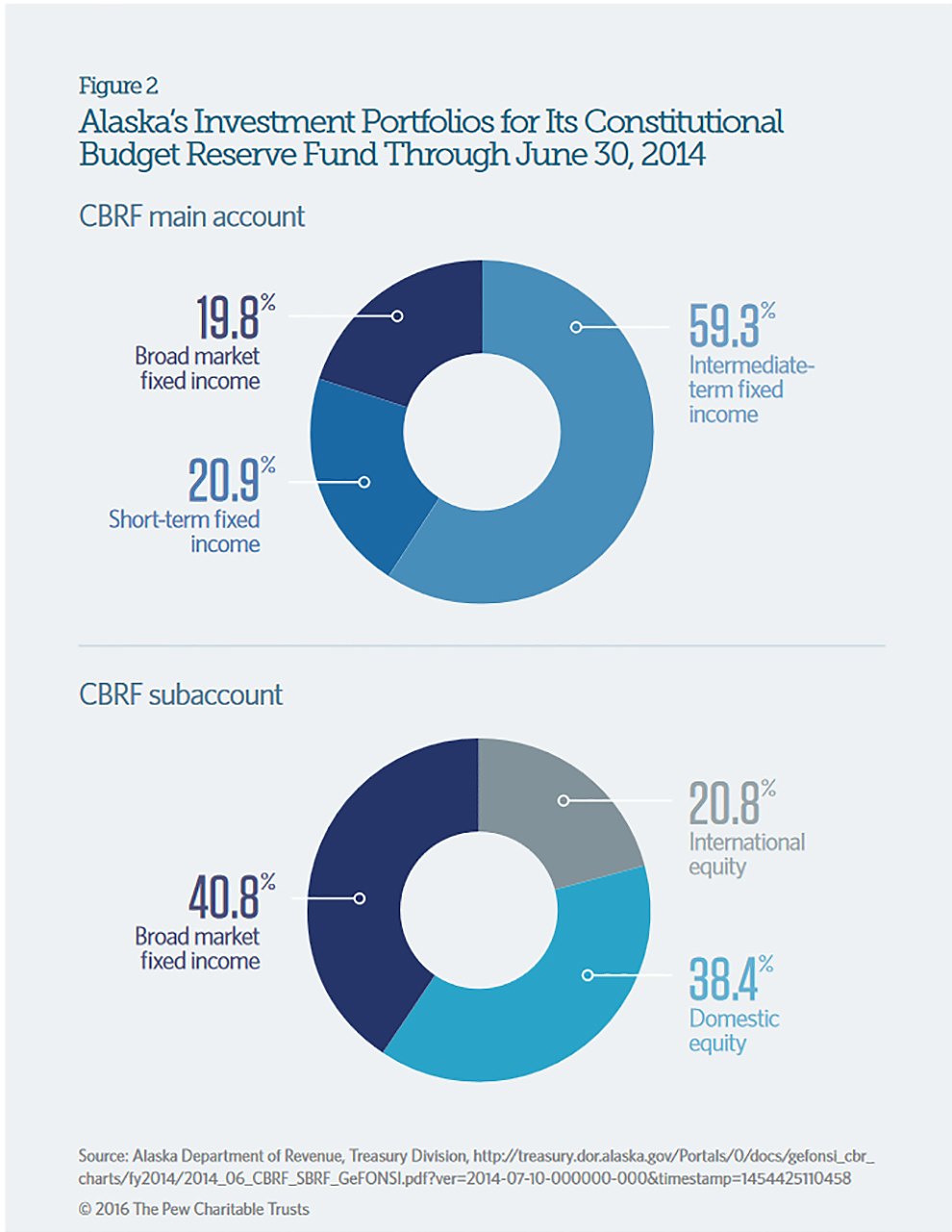 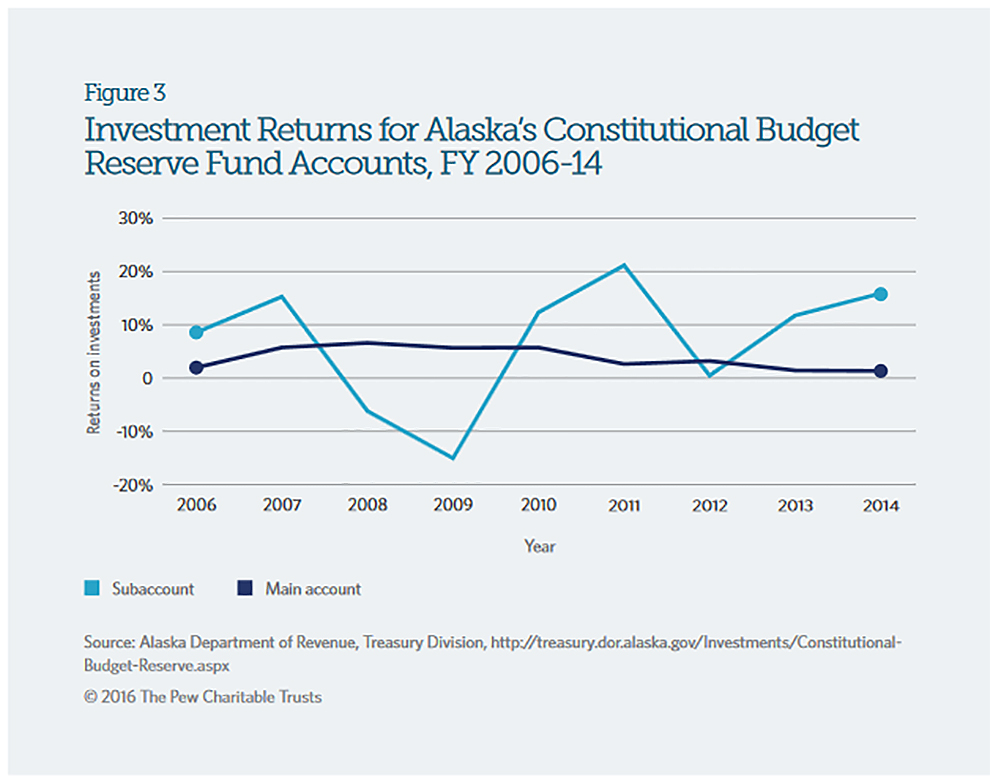 The recent downturn in oil prices, however, has dramatically altered Alaska’s fiscal situation. With the state now facing severe deficits, officials in the treasury can no longer certify that the state will not require balances from the Constitutional Budget Reserve Fund within the next five years. Consequently, officials closed the CBRF subaccount in March 2015, liquidated most of its equity investments, and transferred the remaining balance into the main account.12

As a result of this transfer, the state’s equity holdings are down from roughly $4 billion at the end of fiscal 2014 to under $700 million in December 2015. Fixed-income investments now account for roughly 93 percent of the CBRF’s investment portfolio, promising a lower rate of return but preserving liquidity.

These experiences highlight the need for states to balance competing pressures of higher yields and lower risk when they decide on investment strategies for reserve balances. Well-capitalized reserves provide valuable flexibility against revenue and economic shocks, but this flexibility can be lost if reserves are inaccessible or depleted by market fluctuations. States stand to benefit from rigorously assessing investment strategies for their reserves alongside the adequacy of these reserves. Policymakers should determine the volatility of their revenue streams, specify what conditions warrant reserve use, and ascertain what degree of fiscal stress they wish to guard against, as recommended by Pew in the report Why States Save.13 These considerations can help states establish whether their reserve totals provide sufficient protection against fiscal distress and can further inform discussions about responsible investment portfolios. Only if expected short-term requirements are met should states pursue investment strategies that expose reserves to greater financial risk.