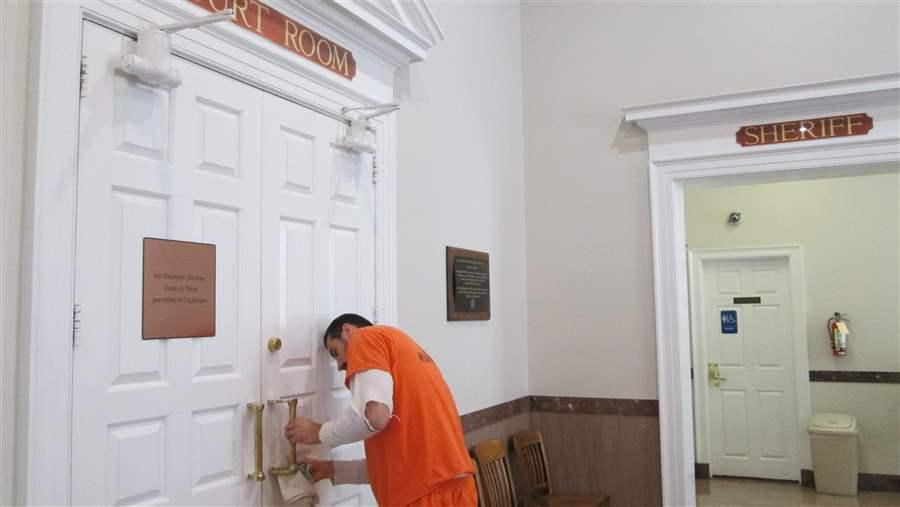 Travis Tyree, an inmate at the jail in Charlottesville, Virginia, has paid off more than $7,000 in court debt by doing community service at a local courthouse. Community service programs like the one he’s in offer people a way to pay court-imposed fines and fees.

CHARLOTTESVILLE, Va. — When Steven Robinson first landed in county jail here for cocaine possession about a year ago, he had about $12,000 in court debt and his driver’s license had been suspended for more than 20 years because he never paid off earlier fines and fees.

But Robinson, 47, and other inmates in the Albemarle-Charlottesville Regional Jail are allowed to do community service to work off the debt that they rack up in fines and fees on their way through the court system. By doing more than 1,000 hours of community service while serving time, Robinson has gotten his debt down to about $5,000.

Under the debt-relief program, developed by the City of Charlottesville and two surrounding counties, the inmates’ debt is reduced by $7.25, the state’s minimum wage, for each hour they work. Inmates put in hours at jobs, such as clearing trash or maintaining parks, for various government agencies.

The judges, prosecutors, court clerks and jail administrators who developed the program say it helps to keep people from being thrown into a spiral of debt with little or no way of paying off their fines and fees, particularly as interest on the debt mounts.

“It doesn’t take long for court fines and fees to build up on people and if you create a mountain that’s too high to climb, people give up hope,” said Charlottesville General District Judge Robert Downer Jr. “This [program] lets people meet their obligations and holds them accountable but it gives them a way forward.”

Other states have similar programs that are aimed at helping people dig out from under court-ordered debt that the national Conference of State Court Administrators warns can often not be paid off and can even trap people in a “modern-day version of debtors’ prison.” Georgia, New Mexico and Washington state, for example, let people work off debt with credits commensurate with the minimum-wage like Robinson does. Michigan in some cases allows people to reduce their debt by meeting education requirements like getting a GED diploma.

But it can be challenging to start programs — especially because courts in many states are largely dependent on the money from fines and fees to finance their operation. At a time of tight budgets, it can be politically problematic to choke off a steady revenue source. Budget-strapped Oklahoma last year raised court fees to help cover the costs. And this year in Florida, court clerks warned state legislators that if they approve a community service debt-relief program, they may have to plug an $80 million gap in court funding if too many people opt to perform community service rather than pay fines and fees.

Lauren-Brooke Eisen with the Brennan Center for Justice, which researches criminal justice issues, said the number of fees assessed nationally to fund a growing criminal justice system has been increasing.

“Some of these fees fund worthy causes but defendants are basically paying for all these services and sometimes paying to keep lights in courthouses on. It’s not the most efficient or just use of resources,” she said, adding that the majority of people involved in the criminal justice system are indigent. “You’re basically asking the poorest people to fund our court system.”

Fines and fees can add up quickly. In Virginia, for instance, people who are convicted of misdemeanors and felonies are charged fees for jury trials, blood samples, courthouse construction and other court needs, on top of the fines levied for their crimes. And they are charged 6 percent interest on what they haven’t paid off. 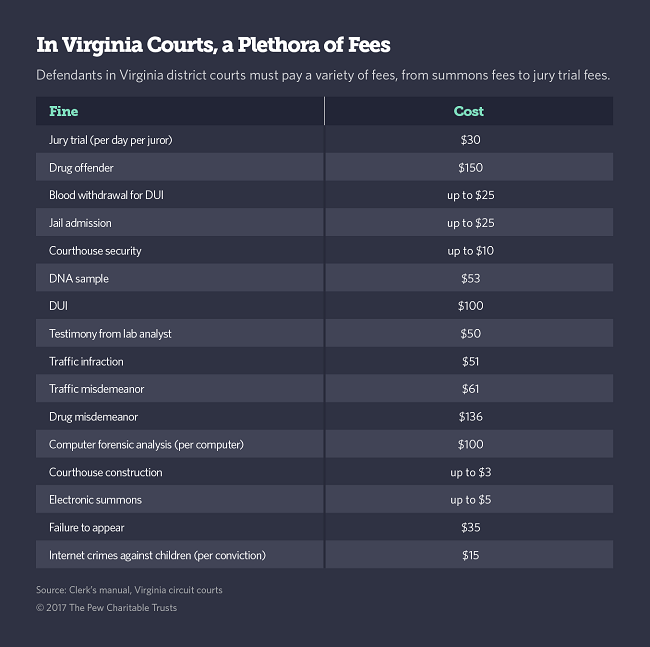 When people can’t pay, it’s Virginia policy to suspend debtors’ driver’s licenses, which makes it hard for people to stay employed or to get a job to pay off their debt. Many people, including Robinson, continue to drive after their license has been suspended and, if they are caught multiple times, can end up in jail.

More than 940,000 Virginians currently have their licenses suspended for failure to pay court debt, according to a class-action lawsuit that challenged the practice but was thrown out by a federal judge in March.

Martin Kumer, superintendent of the jail in Charlottesville where Robinson is serving time, said suspending driver’s licenses only compounds the problem for many people with court-ordered debt because they cannot work to earn money to pay it off. “They lose their license. Then they lose their job and have no ability to pay,” he said.

Paying for the Courts

In Florida, Republican state Sen. Jeff Brandes would like to create community service opportunities similar to the program in Charlottesville, while also ending the practice of suspending driver’s licenses when people can’t pay court debt.

Brandes wants the state to find another way, such as more direct state funding, to keep courts, which are partially funded through fees, running. But so far, the state hasn’t.

“It’s one of these areas where everyone agrees on the policy but the dollars behind it are what keeps it from advancing. It shows you the perverse incentives we’ve created for how we fund clerks,” Brandes said, referring to the people who run the court system. “If they don’t have transactions they don’t get funded.”

Advocates of doing away with using fees and fines to underwrite the courts argue that because so many people cannot pay them, the fees and fines really don’t serve their intended purpose. A survey of courts in Tennessee in 2012, for example, found the collection rate was 72 percent in civil courts and 30 percent in criminal court.

But rolling back Tennessee’s existing court-related fees is difficult, said Republican state Rep. Martin Daniel, who is pushing for the creation of a state council to review fees. Since 2005, the Tennessee Legislature has passed 46 bills that increased or added new fees, or allowed local governments to do so, creating a patchwork of fees at different levels of the courts that is difficult to untangle.

‘I Just Couldn’t Afford It’

Charlottesville’s community service option also is open to those whose court debt is not tied to crimes that require jail time. They work at various nonprofits in town, which report those hours back to the court.

The program for those outside of jail is limited to people who cannot afford to pay. That’s for two reasons, said Downer, the district judge: so the fees aren’t viewed as optional and so unemployed people can make connections through their service that could lead to a job.

Inmates perform community service at different government jobs. They help out the parks department by clearing trails and painting over graffiti. If spending the day with the local branch of the state Department of Transportation, inmates might help clear roads of trash and debris or even work as a flagger, controlling traffic while crews are working. That job requires taking a class to become certified, giving inmates a new avenue for employment when they leave jail.

Kumer, the Charlottesville jail superintendent, said the program also saves the local government and the state money. Since 2012, he calculates, the 61,000 working hours that inmates have put in at $7.25 an hour have saved the governments more than $900,000 by not having to hire temporary employees to do the same work at $15 an hour.

The program is popular with inmates. Not only does it help them get out from under their court debt, it keeps them busy and gives them a chance to see what’s happening beyond the jail walls.

Robinson has nearly two years left to serve in jail, and he expects to start a work-release job soon. He said the money he earns there, and the dent he’s already made to his debt through the community service program, will allow him to be free of court debt or close to it for the first time since the early 1990s.

Without the program? “Twelve thousand dollars in debt with four kids? I just couldn’t afford it,” Robinson said.

He’ll also be able to get his license reinstated so he can drive legally for the first time since 1992.