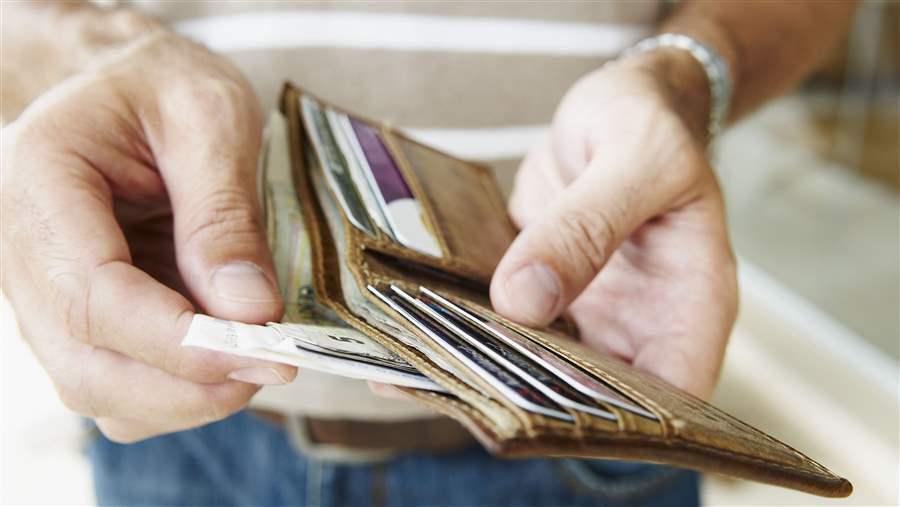 Expenditures are a key but often overlooked element of family balance sheets. In measuring household financial security, significant attention is typically paid to income, but much less to whether those resources are sufficient to cover expenses. To begin addressing this gap in the policy discourse, this chartbook uses the Bureau of Labor Statistics’ Consumer Expenditure Survey to explore household expenditures, examining changes in overall spending and across individual categories from 1996 to 2014.1 It also details the differences in expenditures by income, with a particular focus on the degree to which households have slack in their budgets that could be devoted to savings and other wealth-building efforts.

This analysis focuses on the working-age population, which includes survey respondents or their spouses who are between the ages of 20 and 60. For the purpose of examining differences in spending by income, the sample was divided into thirds.

The analysis shows that both median income and expenditures contracted after the Great Recession, reflecting the economic turmoil of the country. By examining household spending, this research helps to shed light on family financial security over time, and especially in recent years. Key findings include: 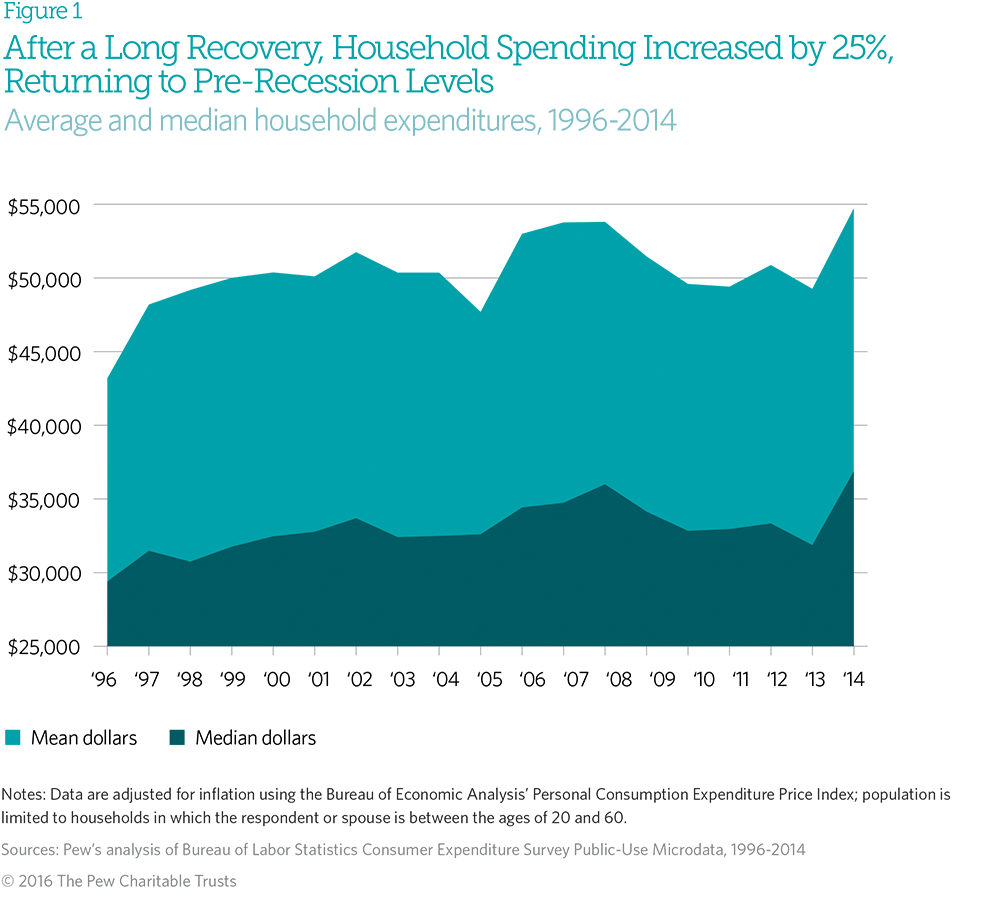 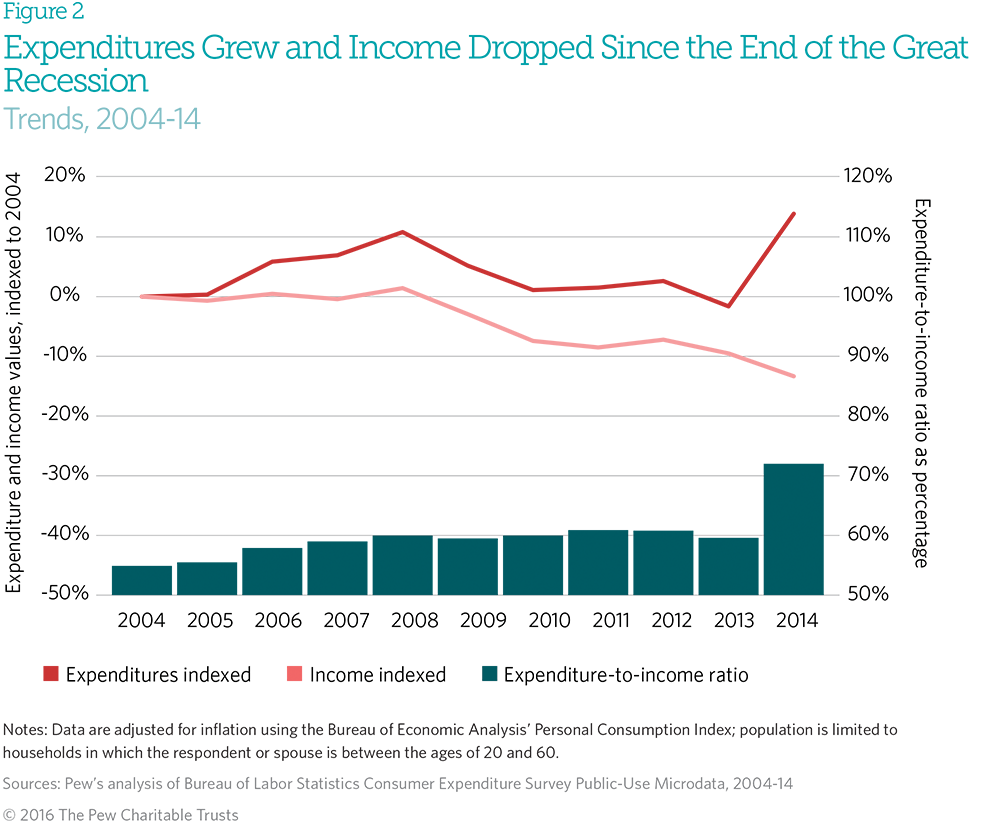 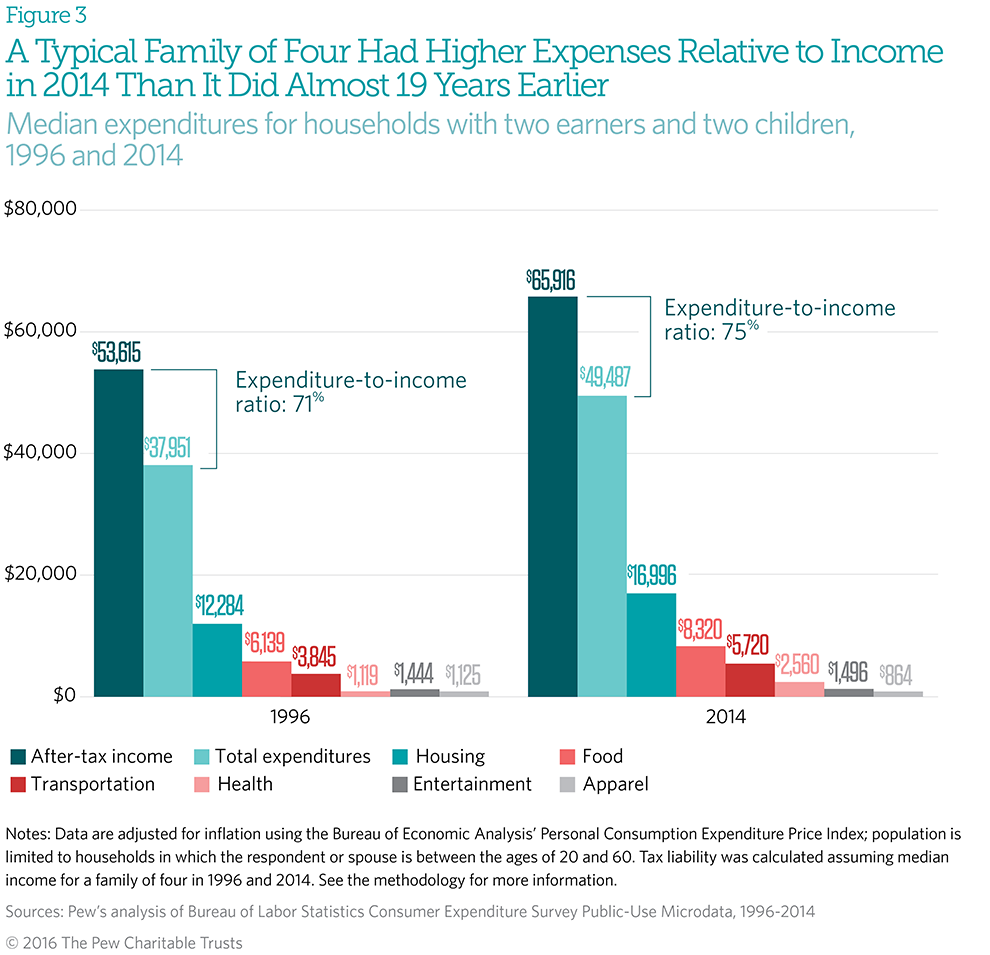 For a typical family of four (two earners and two children), while median household income increased by about $10,000 between 1996 and 2014, annual expenditures also increased by about the same amount, driven largely by higher spending for core needs: housing, food, and transportation. Although the absolute change in income and expenditures was similar, this family had less slack in its budget in 2014 than in 1996, as its expenditure-to-income ratio grew from 71 percent to 75 percent. 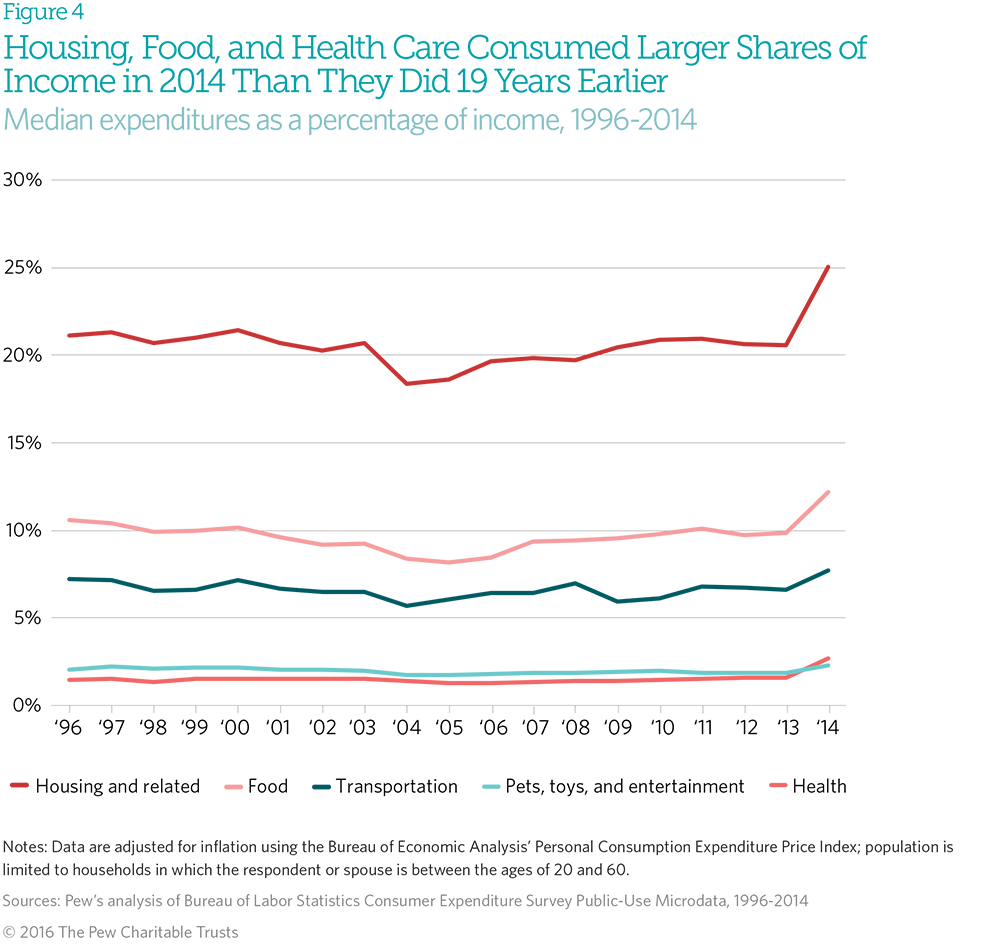 About two-thirds of families’ spending goes to core needs: housing, food, and transportation. In 2014, housing obligations accounted for the largest share of household pretax income, about 25 percent. Over the 19-year study period, aggregate median housing expenditures absorbed 21 percent of families’ pretax income. The second-largest expenditure, food, typically consumed nearly 10 percent of family income, while transportation took 7 percent. The proportion of household spending that these categories account for has shifted very little over the past two decades. 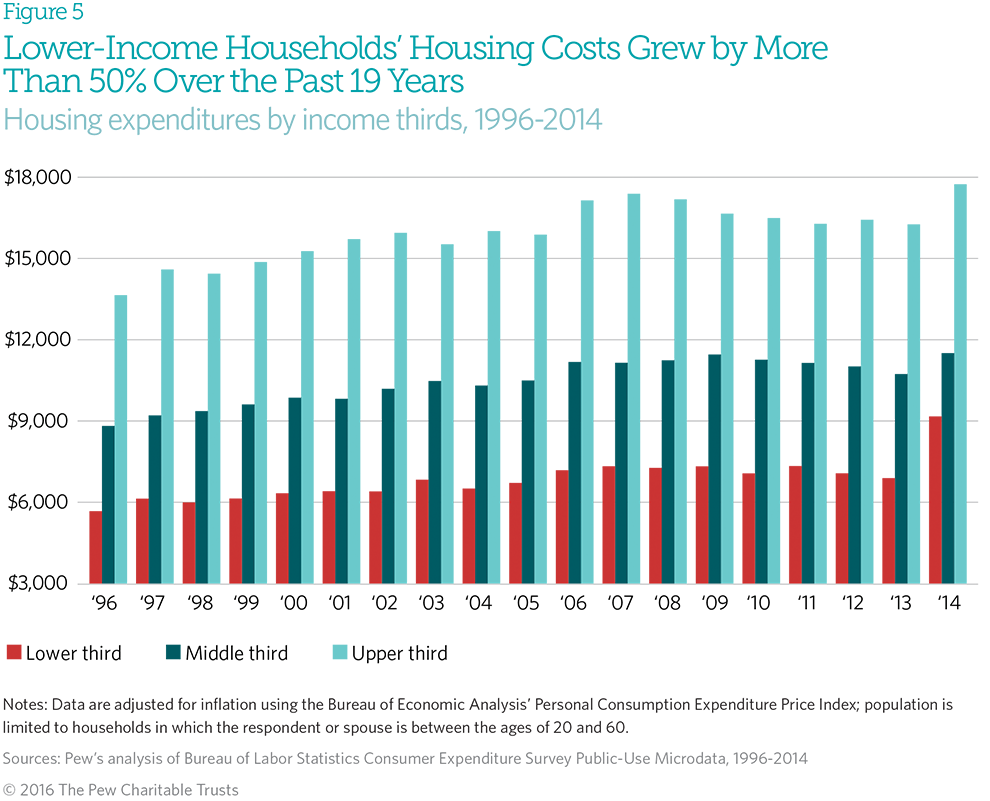 Over the past two decades, spending on housing increased for Americans in all income tiers. In 2014, households in the lower third spent much less in absolute dollar terms (about $9,200) than those in the middle or upper thirds, whose median housing expenditures reached $11,500 and $18,000, respectively. However, the typical lower-income household spent far more on housing as a share of income (40 percent) than those in the middle (25 percent) or at the top (17 percent). 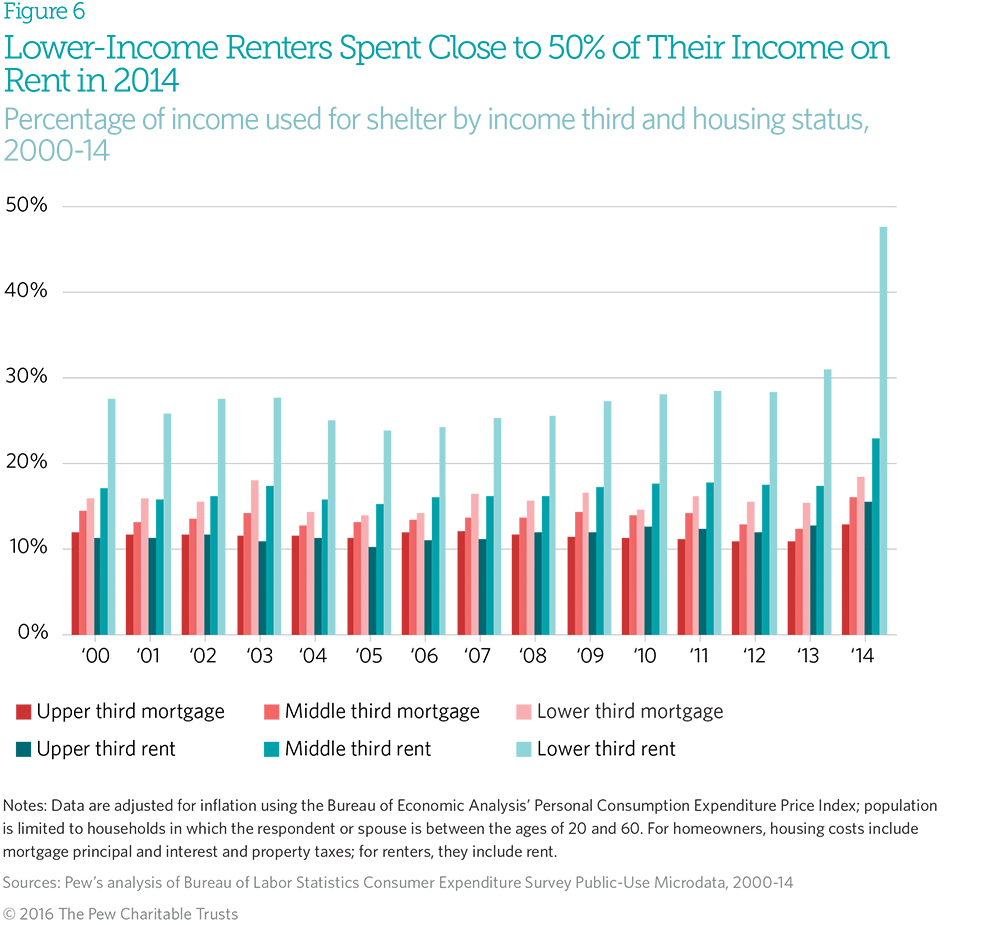 Since the start of the housing crisis in 2007, homeownership rates have declined among households in the middle- and upper-income tiers. These decreases have affected the rental market, as former owners became renters, leading to rental vacancy rates at historical lows below 7 percent.4 The diminished supply of rental properties increased the cost of rental housing dramatically; in 2014, renters at each rung of the income ladder spent a higher share of their income on housing than they had in any year since 2004. Although both renters and homeowners spent more for housing in 2014, notable differences in the proportion of household resources going to shelter were evident across income groups, with lower-income renter households spending close to half of their pretax income on rent. 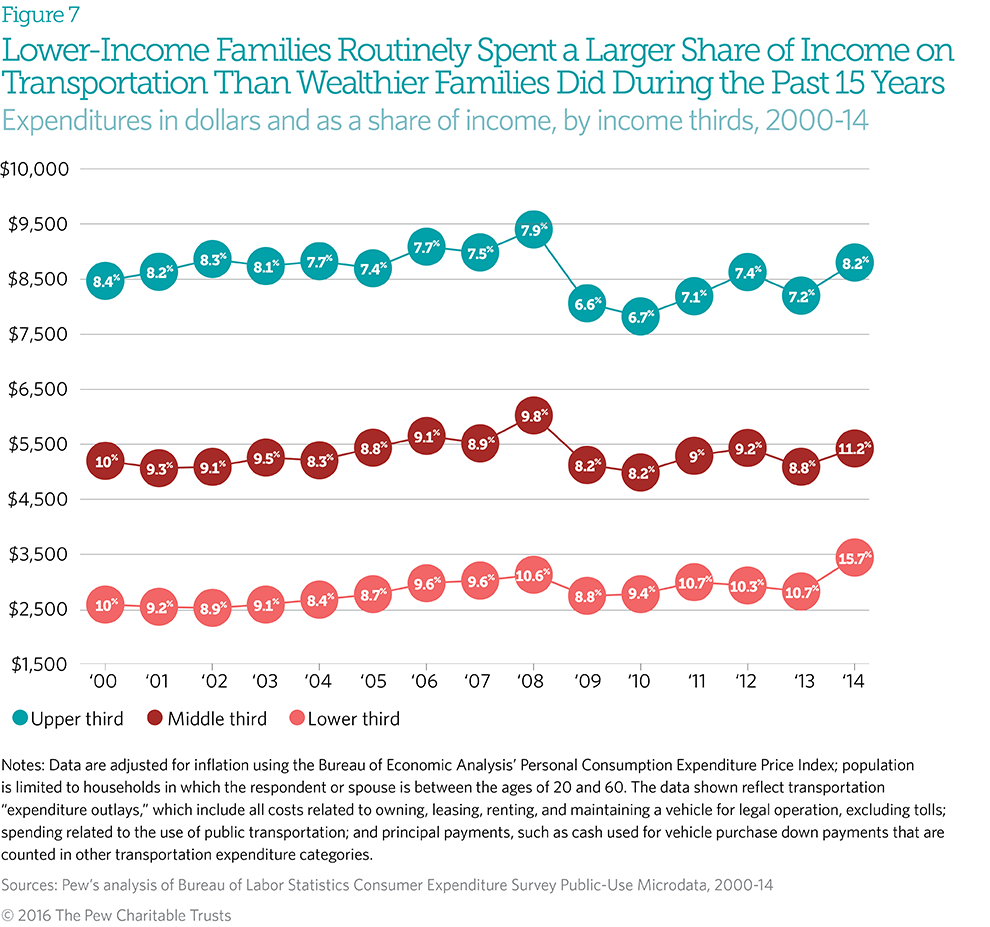 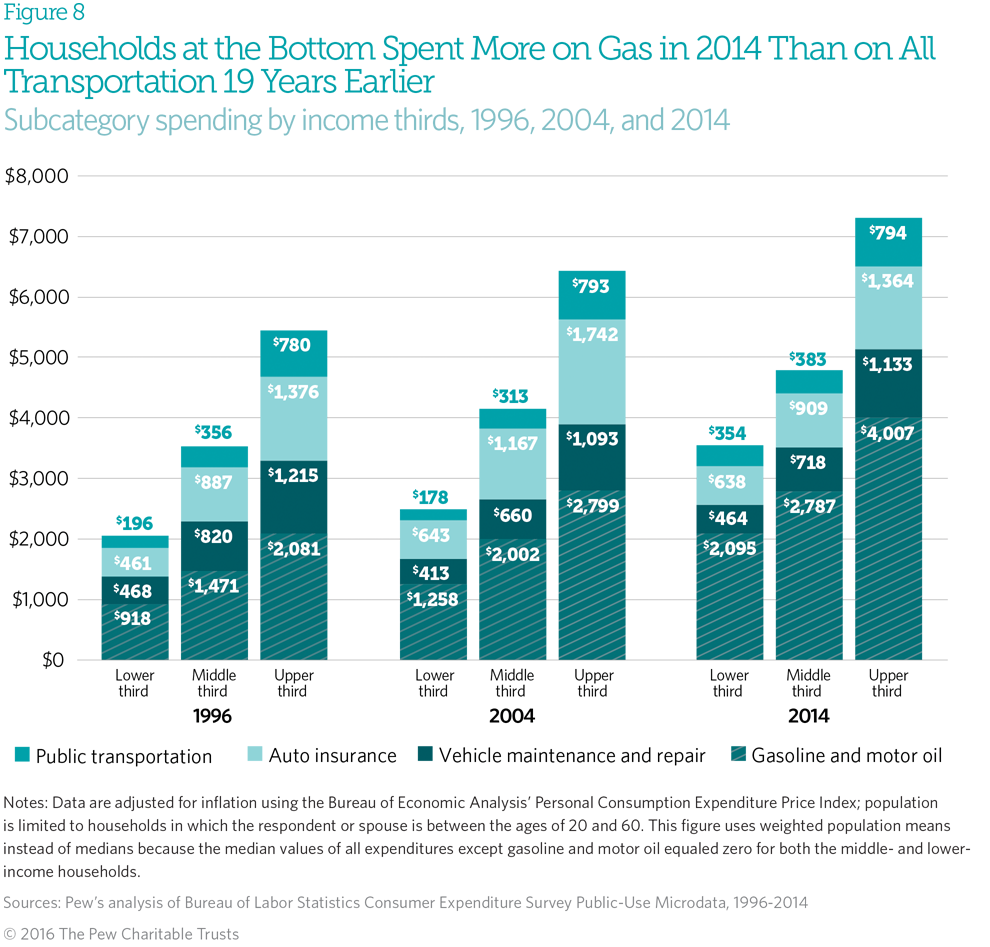 As the share of household income used for transportation increased, the amount going to various subcategories also grew. For all income groups, expenditures for gasoline and motor oil doubled between 1996 and 2014. For households in the lower third, the average annual cost of fuel, auto insurance, vehicle maintenance and repair, and public transportation in 1996 averaged $2,000 a year; by 2014, this group spent nearly $2,100 just on fuel. These extreme cost increases force households to make difficult choices and trade-offs to meet core needs. 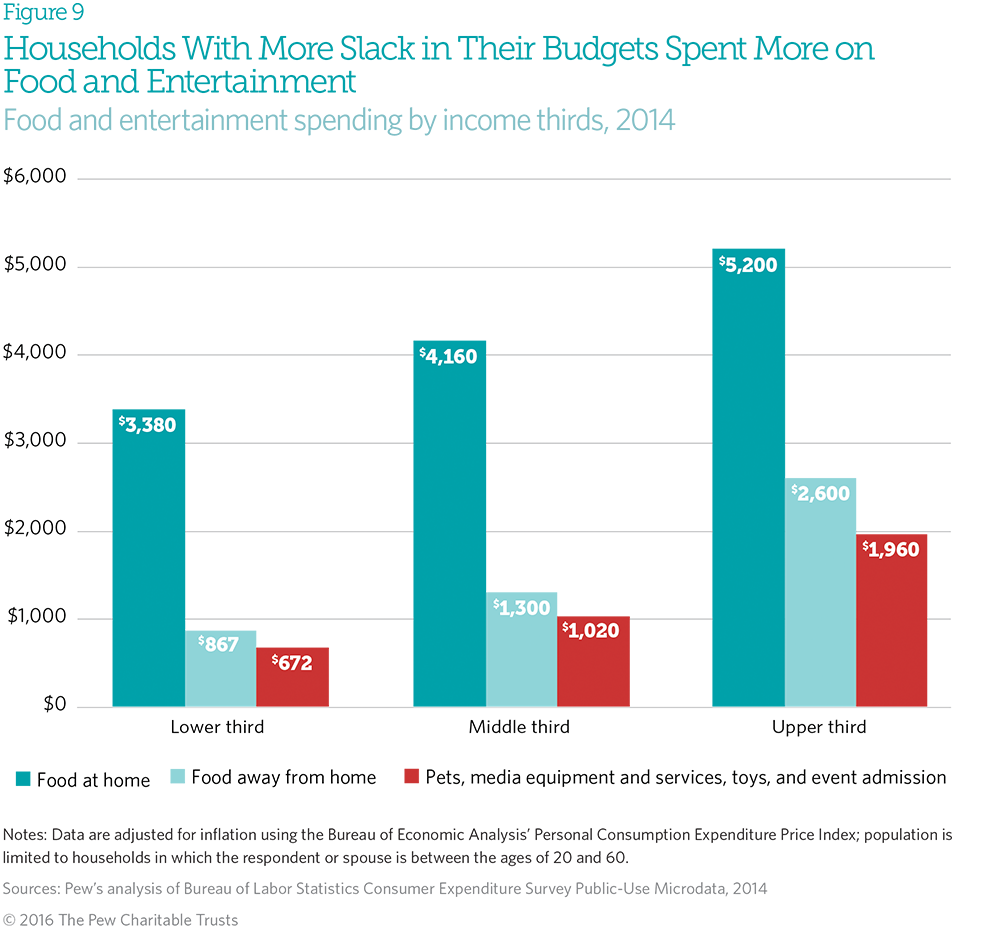 Though systemic economic conditions, such as recessions or stock market changes, affect trends in consumer expenditures, individual households also make decisions about how to spend their discretionary dollars. In 2014, households across the income distribution spent much more on groceries than on eating out, but, predictably, those in the top third spent much more on food away from home than the other groups. Households at the top also spent more than others on entertainment, including pets and pet care, media equipment and services, admission to events such as movies or plays, and toys for children. Typical households at the top spent $380 a month on eating out and entertainment. Conversely, households in the bottom third, which had significantly less slack in their budgets, devoted very few resources to these two categories— about $128 a month. 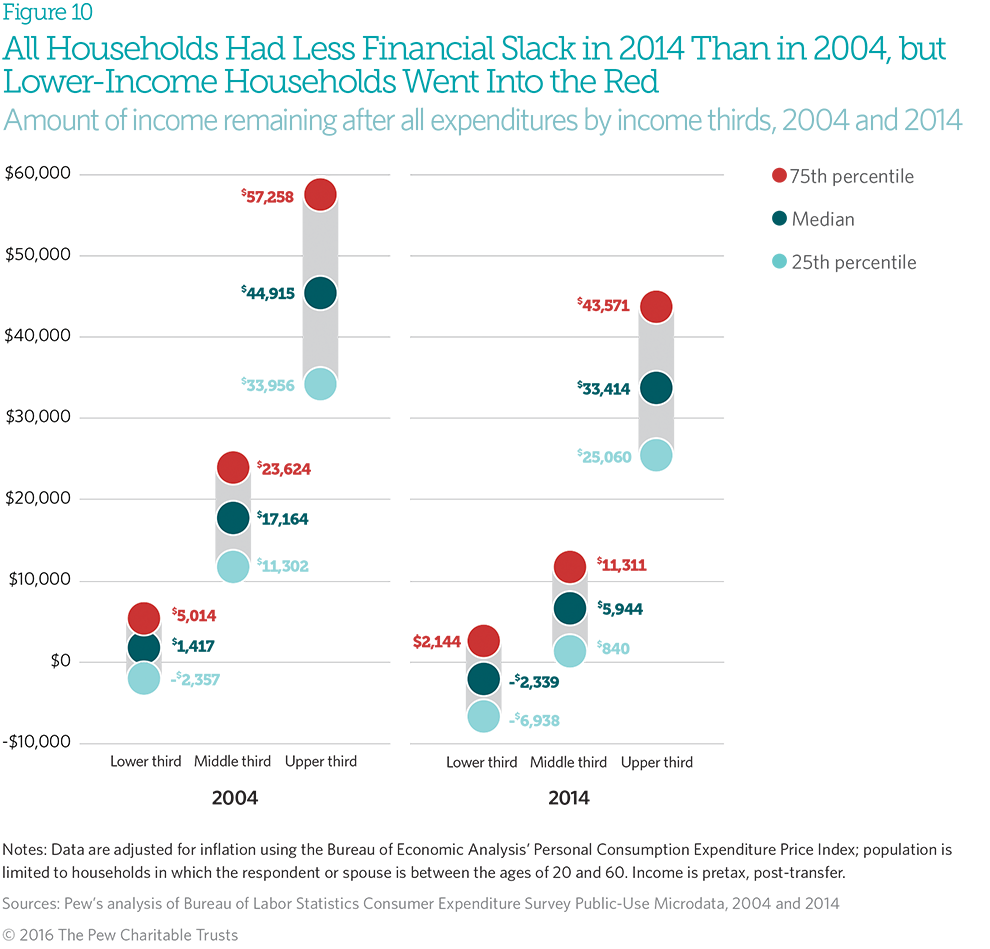 The amount of slack that families had in their budgets declined for all income groups between 2004 and 2014. This means households had less income to devote to wealth-building investments, such as short- and long-term savings, education, and life insurance. In 2004, the typical household in the lower third had a little less than $1,500 left over after accounting for annual outlays. Just 10 years later, this amount had fallen to negative $2,300, a $3,800 decline. These households may have had to use savings, get help from family and friends, or use credit to meet regular annual household expenditures. The typical household in the middle third saw its slack drop from $17,000 in 2004 to $6,000 in 2014. Of note, because income is measured before taxes, some families will have had even less slack in their budgets than this figure implies.

This report seeks to develop a clear picture of the current state of household financial security.

Over the past 30 years, American families have taken on increasing amounts of debt. The growing use of credit among American households, particularly following the Great Recession, has different implications across generations. Although most households have more assets than debt, 80 percent hold some form of debt and that can signal economic opportunity and potential trouble. For example, accruing some debt at an early age can encourage wealth-building, but too much debt later in life can increase financial insecurity. This report provides a comprehensive look at the complex story of American debt&mdash;how families hold it, their attitudes toward it, and how it relates to their overall financial health.