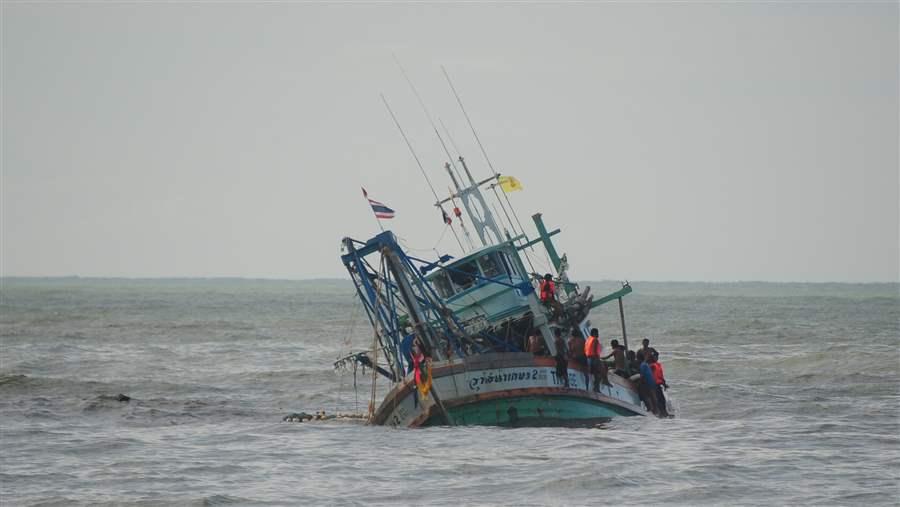 Illegal, unreported, and unregulated (IUU) fishing threatens the sustainability of the world’s fisheries. But it is far more than just an environmental hazard. Illegal fishing is now widely associated with crimes such as piracy, human trafficking, and arms and narcotics smuggling. The International Maritime Organization (IMO), Food and Agriculture Organization of the United Nations (FAO), and International Labour Organization (ILO) have acknowledged the links between IUU fishing and crimes involving the safety and welfare of crews.1

Pressure on global fish stocks is at an all-time high. Fleets can now pursue and catch fish in virtually every part of the world’s oceans, resulting in too many fishing vessels chasing a dwindling number of fish. Overfished stocks lead to reduced catches and lower profits. In response, some operators turn to fishing illegally—without proper licenses or authorizations, or in protected areas—to maximize profits.

Cracking down on this illicit behaviour is especially challenging in the absence of requirements to identify and track vessels. Permanent unique identifiers, such as the IMO number—which provide information on a ship’s origin, history, and operational status—are critical for discerning vessels. In addition, without a requirement for mandatory location reporting, such as automatic identification systems or vessel monitoring systems, authorities are unable to differentiate the good actors from the bad. The combination of these gaps enables criminals to operate with a low risk of being caught.

Unscrupulous fishers may invest less in maintenance, repairs, and safety equipment to further boost their profits, making vessels unsafe and ill-equipped. Crews may be expected to work longer hours under higher pressure, leading to greater stress and fatigue, and operators may take more risks, such as fishing in dangerous weather. These factors increase the likelihood of crew members being injured or killed.

1. Commercial fishing is one of the most dangerous professions in the world.2

2. The casualty rate on fishing vessels is estimated to be more than 10 times that on merchant ships.3

The ILO estimates that at least 24,000 people die every year on commercial fishing vessels and that 24 million are injured.4 The most common causes of these fatalities are foundering, fire, wrecks, capsizing, or collision. In stark contrast, an average of 292 merchant seafarers are reported as dead or missing per year.5 However, a lack of data makes it difficult to determine how accurate these statistics are. In the fishing sector, those who are most vulnerable often do not have adequate ways to report what is happening on their vessels, so the number of reported fatalities is probably lower than the true figure.

3. No binding instrument regulates commercial fishing vessels’ design, construction, and equipment, on which the safety of fishers and observers greatly depends.

Two million people work in the global shipping sector, an industry that is highly regulated by instruments such as the International Convention for the Safety of Life at Sea6 (SOLAS), a 1974 multilateral treaty aimed at ensuring that signatory flag States comply with safety standards.

Lack of oversight throughout the commercial fishing industry means vessels can operate with few or no safety measures in place.

4. Marginalized people are most at risk.

Migrant fishers make up a high proportion of workers on the high seas.8 They often labour in isolation, not speaking the language of other crew members or the skipper.

Lax regulations governing transshipment at sea, the practice of transferring fish from one ship to another, enable crews to be moved from vessel to vessel without entering a port, often staying at sea for years at a time. Without mandatory inspections for vessels operating on the high seas, there is little opportunity to check safety conditions. This leaves crews in operation for longer periods with little or no ability to seek help or make improvements.

5. Exploitation of resources and crews increases with a lack of governance by flag States.

Just as unscrupulous operators may under-report catch or fish illegally for financial gain, crews can be forced to operate without adequate training or safety equipment under dangerous conditions. To minimize upfront costs, inadequate equipment or inappropriate vessel modifications may be used to increase catch. Vessels may operate for extended times without ever undergoing inspections or safety certifications, which can lead to fatalities.

An international binding treaty that sets safety standards would provide maritime authorities with a safeguard against exploitation.

6. States can act to improve safety by becoming parties to the Cape Town Agreement.

In Cape Town, South Africa, in 2012, States reached agreement under the auspices of the IMO to improve the safety and working conditions of commercial fishers and observers. The Agreement details standards for design, construction, and equipment—including safety protections—of fishing vessels 24 meters or more in length. The Cape Town Agreement also outlines regulations for crew and observer protections and calls for harmonized inspections—those that consider fisheries, labour, and safety issues. It will enter into force once 22 States, with an aggregate fleet of 3,600 eligible fishing vessels, become parties to it. The Agreement can complement existing policies, like the Port State Measures Agreement, an international treaty designed to curb illegal fishing and enable inspections at ports. The Agreement could also serve as a vehicle to mandate IMO numbers and automatic identification systems on fishing vessels, enabling States to accurately identify and track vessels, ultimately improving transparency and crew safety.

When all these elements are in place, the economic cycle perpetuating underinvestment in fishing vessel safety can break.

By joining the Agreement, States that already have fishing vessel safety regulations can demonstrate leadership on an important issue and encourage those that lag behind to create them. Those without such regulations can raise their standards and provide protection for vulnerable workers.

Policymakers have the opportunity to raise global safety standards on fishing vessels and to help ensure the safety of crews worldwide. States’ accession to the Agreement will aid its entry into force. In the meantime, seafood buyers can improve safety and working conditions within their supply chains by implementing provisions from the Agreement, purchasing seafood from States that have acceded to the Agreement, and encouraging States that have not joined to do so.

The commercial fishing sector, especially those vessels that operate illegally, often generates dangerous environments and substandard working conditions. Implementing policies to identify and track vessels and protect crew safety would minimize the loopholes that some operators use to exploit the oceans and the people who depend upon them.

The entry into force of an international binding treaty such as the Cape Town Agreement will give States a powerful tool to ensure that fishing vessels flying their flags are held accountable for the safety of their crews; that catch landings are conducted safely and legally; and that their obligations as responsible flag States are fulfilled.

Update Notice: In order to provide an active online resource to the material cited in the fact sheet, Endnote 4 was updated on February 8, 2018.

How Illegal Fishing Threatens the Safety of Crews

The financial drivers behind illegal fishing can lead to poor safety and labor conditions for vessel crews. When stocks are overfished, fishers’ catch and income are reduced.

The financial drivers behind illegal fishing can lead to poor safety and labor conditions for vessel crews. When stocks are overfished, fishers&rsquo; catch and income are reduced.